Days of Our Lives Spoilers: Anna And Abigail Attempt To Rescue Their Loved Ones 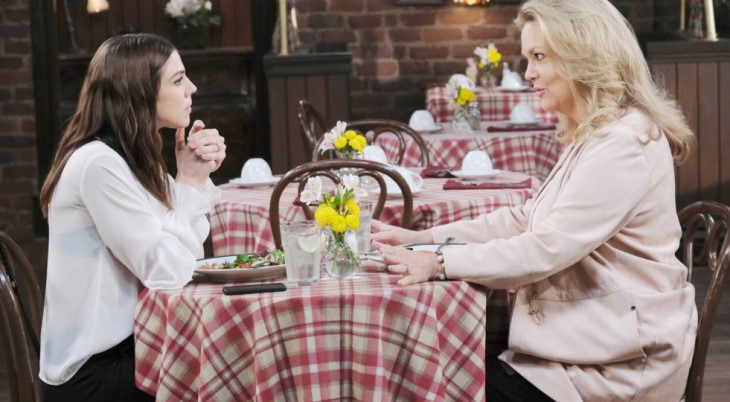 Days of Our Lives spoilers tease that Anna DiMera (Leann Hunley) and Abigail DiMera (Kate Mansi) will attempt to rescue their loved ones in an upcoming episode of Days of Our Lives!

Days of Our Lives viewers will recall from previous episodes that Chad DiMera (Billy Flynn) had trapped Kate Roberts (Lauren Koslow) and Gabi Hernandez DiMera (Camila Banus) in the tunnels underneath the DiMera mansion, locking them in the secret room that Stefan DiMera (Brandon Barash) had once used as a wine cellar. He was interrupted before he could kill them by his wife Abby’s arrival home from Africa, but then afterward his father, Stefano DiMera (Stephen Nichols) changed his mind about his kill order anyway.

Chad has been under the influence of his father’s brainwashing since shortly after Abby left. Abby became suspicious, as had Kate, who had slipped a note that Stefano left for Chad in her clothing before he knocked her out with a large bookend, shortly thereafter having knocked Gabi out with the same bookend! In a later episode, Tony DiMera (Thaao Penghlis) and Anna had come to the DiMera mansion, along with Kristen DiMera, (Stacy Haiduk) who had arrived for a family meeting requested by Stefano, and took Kristen and Tony with him, while Anna and Abby were left behind at the DiMera mansion.

Abby had been able to tell that Chad was not himself, and talked to Anna about some of the strange, somewhat teasing things he had said to her – like when she teased him about keeping tramps in the house, and he had told her “actually two” and told her there were “rats in the tunnel” and that he had seen a “couple of rats.” Two tramps, two rats, and she had to investigate. As Anna stayed in the living room, Abby entered the tunnel through the secret door – and entered the “wine cellar” only to be knocked out briefly by Gabi, who thought she was Chad!

However, she recovered quickly and the three went back to Anna in the living room, where Kate pulled out the note and Abby and Anna were convinced that Chad again had been brainwashed by Stefano, although Abby didn’t want to believe it at first. Meanwhile, at the new version of Maison Blanche at Crystal Lake, just outside of Salem, Kristen, Tony, and Chad were there for the “family business meeting” which turned out to be Stefano’s wedding to Marlena Evans (Deidre Hall), and Chad was to be the officiate who would perform the ceremony, Tony was to be Stefano’s best man, and Kristen was to be Marlena’s maid of honor.

Tony and Kristen attempted to talk privately after Tony told Chad they needed more drinks, as he left the room for the drinks; Tony had told Kristen that Anna had put a phone finder app on both his and Anna’s phone and he had activated it before Chad took their phones, as back at the DiMera mansion, Anna told Abby, Kate and Gabi about the app and turned it on. The app worked – and now they have the location of Tony, Kristen and Chad, and also Marlena!

Abby and Anna take off for Maison Blanche, with the plan being to rescue Tony, Chad and Marlena from Stefano. Brady Black (Eric Martsolf) and John Black (Drake Hogestyn) are already there, unbeknownst to the two women, thanks to Hope Brady (Kristian Alfonso) having remembered what Stefano told her about it as Princess Gina. Abby will attempt to break Chad out of the brainwashing while Anna will attempt to bring Tony home, while causing a lot of chaos!