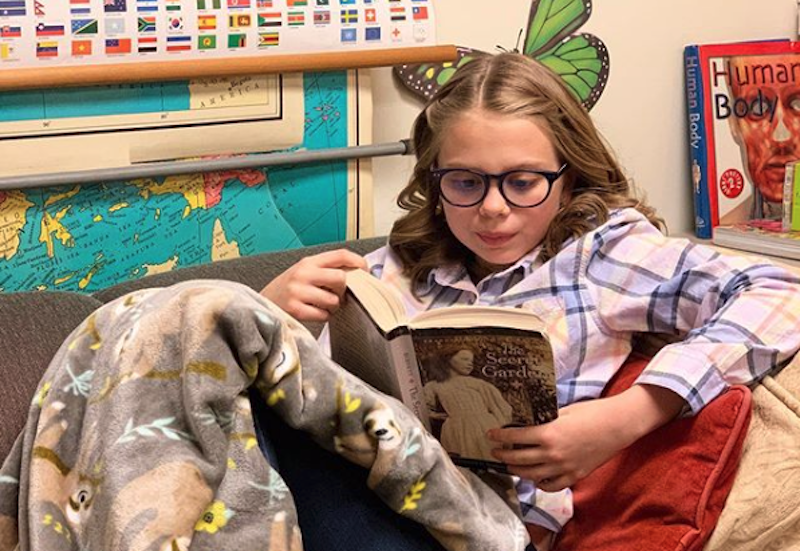 In a recent Instagram post, ten year old Scarlett Fernandez stands in front of a hail embellished trampoline obviously in the backyard of her and her family’s home, dressed in shorts, top, hoodie, and rain boots, and comments: “When you are a California girl and it starts to hail, you throw on anything you can in a split second and collect what you can to make snowballs!!” It rarely snows in southern California, although sometimes there is hail and there can be a slushy mixture of not quite formed snow called “graupel.” It can be assumed that Scarlett’s “hail balls” probably didn’t last too long and perhaps were a little hard to get to stick together for forming actual balls! However, it is a good bet that she gave whoever her snowball fight opponent was “hail”!

More About Scarlett Fernandez And The Roles She Has Played

When you are a California girl and it starts to hail, you throw on anything you can in a split second and collect what you can to make snowballs!!

A post shared by Scarlett Fernandez (@officialscarlettfernandez) on Mar 26, 2020 at 4:54pm PDT

Although she currently plays Charlotte Cassadine, daughter of Lulu Spencer, played by Emme Rylan, and Valentin Cassadine, played by James Patrick Stuart, in the ABC daytime drama “General Hospital”, young Scarlett has also played in a couple of other series in her very young career as an actress; she played in the 2016 Fox television series “Lethal Weapon” as Kate, and in the Showtime series “Shameless” as Jeni. She is most well-known, however for her General Hospital role as Charlotte. Scarlett is ten years old, having been born on August 4, 2009, and her character, Charlotte is also ten years old. Charlotte was conceived via in vitro fertilization, with Lulu’s egg being harvested while she was being held captive by Nikolas’ father, Stavros Cassadine (Robert Kelker Kelly) and fertilized by Valentin, then carried by a surrogate. She has a half-brother named Rocco Falconeri (O’Neill Monahan).

Upcoming storylines hold much drama for Scarlett’s GH character: Charlotte; she began acting out aggressively at the age of eight, bullying some of her younger classmates including her cousin Aiden Webber (Jason David) and then, after she witnessed Valentin, her “papa” as she calls him throw Ava Jerome (Maura West) off a parapet and her uncle, Nikolas Cassadine (Marcus Coloma) rescue her, she started acting out even more aggressively. She has also seen her ex-stepmother Nina Reeves (Cynthia Watros) who she was once close to reject the woman she thought was Nina’s daughter, Sasha Gilmore (Sofia Mattsson) and the two women’s hearts be broken, and subsequently cut up a photo of Sasha that had been on Nina’s desk, and drew a mustache on a sketch of Ava that was being worked on by Franco Baldwin (Roger Howarth). She also heard her birth parents arguing over her custody, and that’s a lot for a little girl to endure in the short space of only six months or so! GH fans can look for Charlotte to give some family and friends some “hail” in the next few months!

Stay tuned to GH to see Scarlett as Charlotte, and check Hollywood Hiccups frequently for all the latest news, updates and developments!