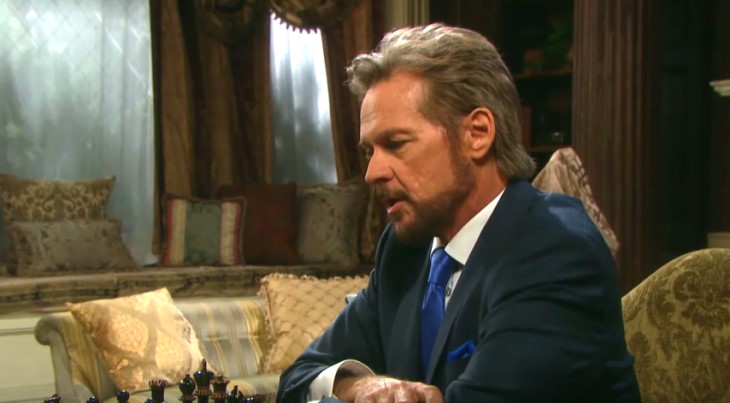 Days of Our Lives spoilers reveal that Steve Johnson (Stephen Nichols) will make a comeback. Head writer Ron Carlivati recently discussed the demise of Stefano DiMera and the return of “Patch.” Plus, a promo clip confirms that “Stayla” fans are going to get what they want when the man reunites with Dr. Kayla Brady (Mary Beth Evans). Keep reading to find out more about killing “Steve-ano.”

Days of Our Lives Spoilers – ‘Queen of the Night’ Wedding

Days Of Our Lives Spoilers: Stefano Urges His Queen, Marlena To Kill John

DOOL spoilers reveal that Stefano and Marlena are married now, even though it’s not technically legal. After all, a brainwashed Chad DiMera (Billy Flynn) was the officiant. Tony DiMera (Thaao Penghlis) and Kristen DiMera (Stacy Haiduk) were forced at gunpoint to be the witnesses. The bride had a brain chip inserted inside of her. Besides, she is still legally married to John Black (Drake Hogestyn).

In the latest issue of Soap Opera Digest, it is confirmed that Anna DiMera (Leann Hunley) runs off to find Tony thanks to her phone tracking app. Imagine her surprise when she finds out about the “wedding.” She will save the day by causing “complete chaos” and injure Stefano’s eye. She takes off her stiletto heel and stabs him in the eye with it.

Days of Our Lives Spoilers – The Return Of Steve Johnson

Days of Our Lives spoilers reveal that head writer Ron Carlivati always planned on bringing back “Patch. He explained what exactly is going on with “Steve-ano.”

“I always knew at the culmination of this story, that when Steve returned, that we want Steve to return as Steve and have that patch again.”

In the spring preview trailer, the real Steve is sitting in a hospital bed. He bursts into tears when he is told about Adrienne Kiriakis (formerly Judi Evans). Then, it is suggested that Kayla ends up reuniting with Steve, which should make “Stayla” fans happy.

Unfortunately, that leaves Justin Kiriakis (Wally Kurth) alone… unless Adrienne really isn’t the one who died. This is a popular theory as she did have a lookalike named Bonnie Lockhart.

Are you looking forward to the real Steve Johnson making a comeback and getting rid of “Steve-ano?” Should “Stayla” reunite after “Patch” makes his triumphant return? Where does this leave Justin Kiriakis and could we be seeing Adrienne one day in the near future? Fans will have to keep watching the NBC soap opera to find out what happens next.