Days Of Our Lives Spoilers: Stefano Urges His Queen, Marlena To Kill John 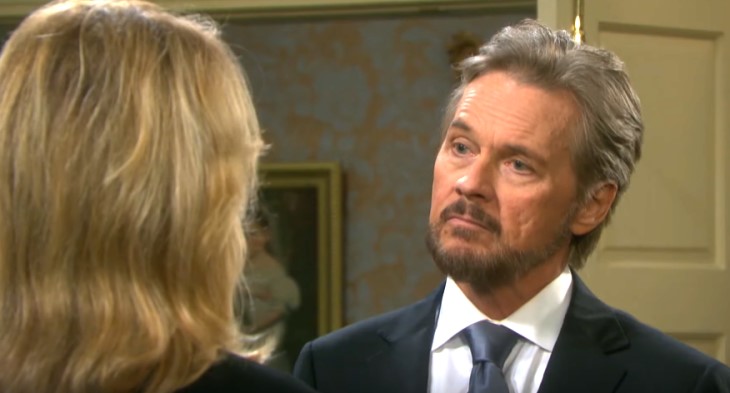 Days of Our Lives spoilers tease that Stefano DiMera (Stephen Nichols) will urge Marlena Evans, (Deidre Hall) his queen of the night, to end John Black’s (Drake Hogestyn) life in an upcoming episode of Days of Our Lives!

John bursts into Stefano’s bedroom upstairs in Maison Blanche, and finds him literally laying on top of Marlena as he is about to consummate the fake marriage to her! He tells Stefano that Marlena is not going to be his queen tonight or any other night as he pulls him off her and a fistfight ensues!

Stefano, meanwhile, tries to convince Marlena that John is the enemy; he tells her to grab whatever she can and deliver a blow to the head and end John’s life! Marlena has a hard time resisting Stefano’s order; in addition to the control chip he had Dr. Wilhelm Rolf (William Utay) put in her brain, to make Marlena love him instead of “The Pawn”,

Stefano has been brainwashing her in the same manner that he brainwashed Chad DiMera (Billy Flynn) who is downstairs, and should be carrying out his father’s kill orders that he gave him against his other two children who have betrayed him, Kristen DiMera (Stacy Haiduk) and Tony DiMera (Thaao Penghlis)!

Marlena keeps hearing a voice in her head as Stefano continues to push her harder and harder to kill John; but she keeps hearing his voice, telling her the same thing she heard before she went through with the wedding ceremony; “Don’t do it Doc, don’t do it Doc!”

Marlena seems to be about halfway drugged, brainwashed, in kind of a stupor but she is conscious enough to know who John is, remember him, and knows that something is not quite right with her being married to Stefano and she remembers hearing John’s voice in her mind telling her, “Don’t do it Doc! Don’t marry him!” She has a hard time processing exactly what is going on, but she decides to go with her instincts and instead of knocking John out, she grabs a heavy object and knocks Stefano out instead!

Days of Our Lives Spoilers: Will Roman And Kate Rekindle Their Romance Now That Hattie’s Gone? https://t.co/XHiLSZ7A8y pic.twitter.com/QwXzvFjiUq

They leave and John calls the police and tracks Brady’s phone and they find them hiding. They have no idea that Stefano has revived and is trying to wake up Chad and kill Tony, but Anna DiMera (Leann Hunley) and Abigail DiMera (Kate Mansi) will soon arrive and save the day, as John, Marlena, Brady, and Kristen will find out later!