Days of Our Lives Spoilers: Why Is Nicole So Obsessed With Mickey’s Parentage? Arianne Zucker Explains 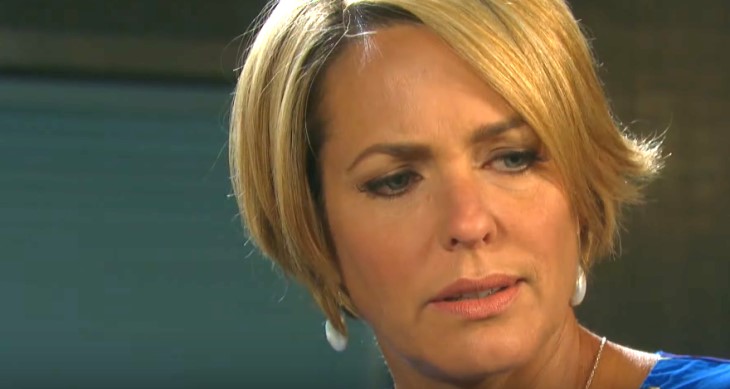 Days of Our Lives spoilers reveal that Nicole Walker (Arianne Zucker) is really pushing finding out the truth about Mackenzie “Mickey” Horton’s (the May twins) real parents. The only way she is really affected is because she loves Eric Brady (Greg Vaughan). So, what is propelling her so hard to learn the truth? The actress discussed Nicole’s search, her motivation, and the baby swap storyline.

DOOL spoilers confirm that Nicole knew that two babies were switched after learning about the birthmark. Brady Black (Eric Martsolf) happened to mention it and next thing we know, Nicole observed that same birthmark on Eric and Sarah Horton’s (Linsey Godfrey) daughter.

There were other clues that along with the birthmark, made Nicole suspect a baby swap. However, she has to find out for sure that she is right, plus figure out a way to prove it. After all, DNA tests often tamper within Salem. As we recently saw, Xander Cook Kiriakis (Paul Telfer) has already managed to do this with Mickey.

Nicole will end up tracking down Dr. Raynor (Victoria Platt), which sends her on a trip to New York. However, she lies to Eric about the reason for her sudden trip. She tells him that it’s business for Basic Black, a lie that is inadvertently exposed by Brady. He happens to inform Eric that there is no company business in New York.

Days of Our Spoilers – The Truth About Mickey Horton

Days of Our Lives spoilers reveal that Nicole is sure putting in a lot of effort to find out the truth. She won’t really be affected by the baby swap reveal. However, she is closely connected to someone that will be directly impacted. Of course, we are talking about Eric, since he thinks that Mickey is his daughter.

In the latest issue of Soap Opera Digest, Arianne Zucker explained why Nicole was pushing for the truth so hard. The actress said,

“It’s not like Nicole went out and chose to be nosy. This just kind of fell into her lap. Now she’s curious and wants to know for sure. She’s got two people who she loves dearly who should probably know the truth.”

Of course, the second person Zucker was referring to is the baby’s biological father, Brady. While he will be overjoyed to learn his baby really isn’t dead, Eric will be devastated. Can Eric and Nicole’s relationship survive this?