The Bold and the Beautiful Spoilers: Brooke Has No One To Blame But Herself – Katie’s A Victim Again 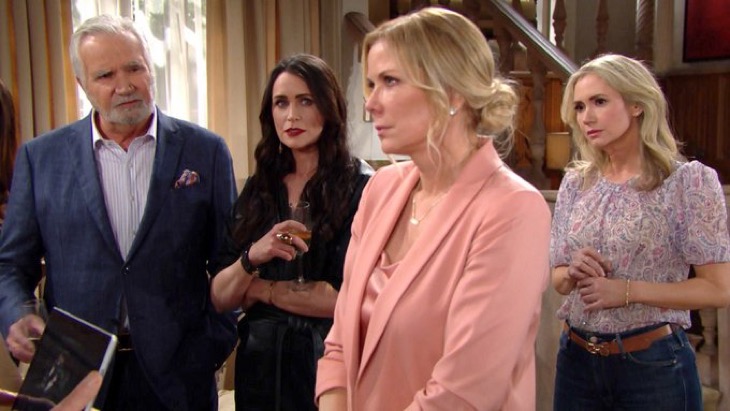 The Bold and the Beautiful spoilers tease that Brooke Logan Forrester (Katherine Kelly Lang) couldn’t bring herself to point the finger at Quinn Forrester (Rena Sofer) after everyone saw the shocking video at the Brill reunion party. She later referenced Thomas Forrester’s (Matthew Atkinson) actions as impacting her own, which Ridge Forrester (Thorsten Kaye) dismissed out of hand.

Lang’s iconic B&B character has no one to blame for the reckless, impulse choice she made inside her cabin in late winter. Babysitting Beth Spencer (Madeline Valdez and River Davidson) for Hope Logan (Annika Noelle) shouldn’t have led to anything controversial, but then Bill Spencer (Don Diamont) unexpectedly showed up at the front door.

Intending to tell Brooke that she needed to appreciate Ridge, Shauna Fulton (Denise Richards) instead witnessed an unbelievable scene when she arrived at the cabin. Using modern impulses, Richards’ character pulled out her smartphone and began recording video, instead of taking a photo.

Quinn is supposedly Shauna’s best friend. But she fully betrayed their long-standing connection while Richards’ character was distracted, forwarded the video to herself, and purposely uploaded it to a digital frame that Brooke had just received from Ridge as a reunion gift.

Dollar Bill has been shelved for about a year. He was truly sincere in wanting to reform himself so that Katie would be convinced of his love.

Bill removed the sword necklace that he wore for many years, indicating an internal change of heart. He also dedicated himself to reclaim his family, which includes Katie and their son, Will Spencer (Finnegan George).

Other than Brooke, no one believes that Bill intended no harm. But his reputation is so dark that any benefit of the doubt isn’t being offered. Instead, Ridge made a fist and hit Bill with a right cross on the left side of his face.

The hard history between Batie is driving Katie’s emotions. She simply can not overlook what Bill did with her sister, based on what’s happened between them before.

On the other hand, Will is better off with both of his parents being together, as Katie knows. So maybe, if Bill is exceedingly fortunate, the love of his life will forgive him. Meanwhile, Brooke isn’t expecting the same reaction from Ridge.