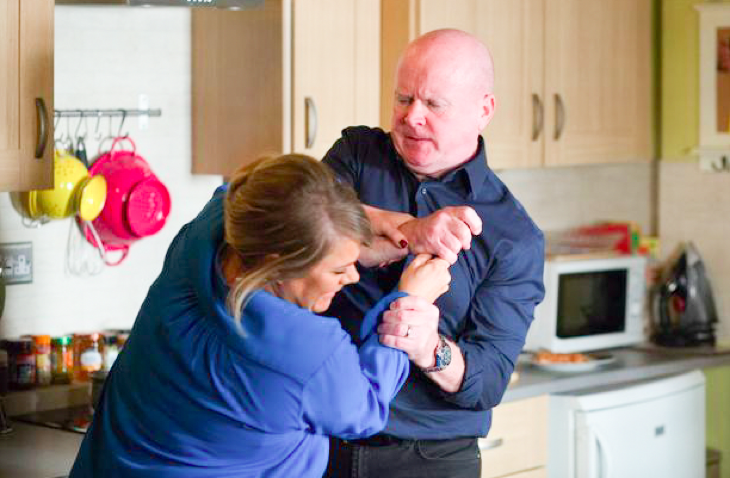 Eastenders spoilers reveal that when Phil Mitchell (Steve McFadden) tries to talk to Sharon Mitchell (Letitia Dean), she attempts to stab him to death. However, after Phil flees and the police leave, the grieving mother goes searching for him. She finds him, but will she be calmer? It is speculated that the two could actually bond over the boy’s death and somehow, forgiveness is granted.

On the day of Dennis Mitchell’s (formerly Bleu Landau) funeral, Phil suddenly returns after fleeing just a few weeks earlier. He approaches Sharon and insists that he has to talk to her. Judging by the look on his face in sneak peek photos, it appears that he is filled with grief and regret. Could he try to explain and perhaps, take responsibility for his part in Dennis’ death?

Eastenders spoilers reveal that Phil isn’t getting the hint when Sharon keeps running away from him. She has no interest in anything he has to say. She is focused on her son being laid to rest and trying to cope with losing everything and everyone. When he doesn’t listen and kicks down the door, she ends up lunging at him with a knife in her hand.

It is teased that at some point during the attempted stabbing, the police get called. Phil flees before the authorities find him there. As for Sharon, she waits until the police leave and goes searching for Phil. Could she be planning on finishing the job or will she be a bit calmer by that time?

Eastenders spoilers reveal that Sharon finds Phil just as he’s about to take a drink. In a sneak peek photo, she appears to be calm. This is leading fans to speculate that the two actually do end up having an open and honest conversation. Even though Dennis’s death really wasn’t Phil’s fault, he did play a part in the events that led up to the tragedy.

Many times, people will end up bonding over their grief. It seems that this could happen to Phil and Sharon. However, will they also end up dealing with their loss in some sort of grief-induced passion? That is what a few viewers are predicting and it’s not uncommon for those mourning loved ones — even if they hate each other. Therefore, it’s really not a stretch to think that it could happen.

To find out, we will have to keep watching the British soap opera to see how this storyline develops.