The Bold and the Beautiful Weekly Spoilers: Ridge Pulls The Plug On Brooke – Follows Shauna To Vegas 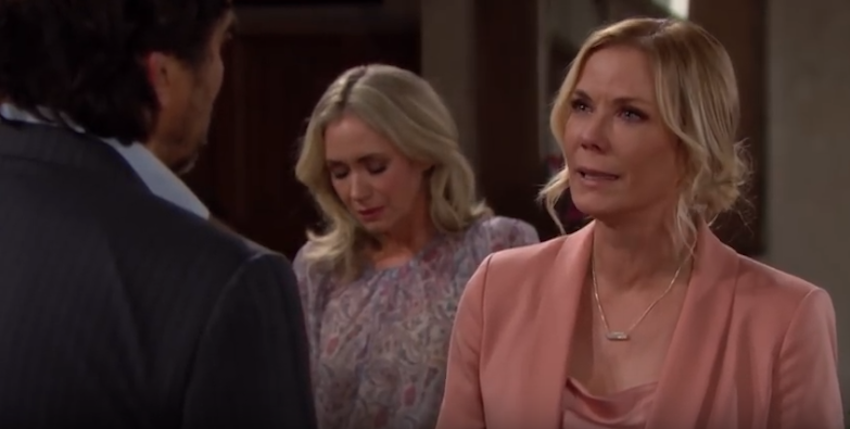 The Bold and Beautiful spoilers tease in the new weekly preview, that Ridge Forrester (Thorsten Kaye) in the aftermath of seeing the steamy video that Quinn Forrester (Rena Sofer) sent to the digital photo frame that Ridge gave to Brooke Logan Forrester) Ridge leaves Brooke and tells her not to follow him as he looks for Shauna Fulton (Denise Richards) for comfort this week on The Bold and The Beautiful!

The Bold and the Beautiful Spoilers: Shauna Fulton Was The One Who Took The Video

Of course, Shauna was the one who took the steamy video of Brooke and Bill Spencer (Don Diamont) to begin with, took it over to Quinn and showed it to her, and she was going to delete it from her phone – she didn’t want to have Ridge heartbroken over seeing this. Quinn, however, kept pushing her to stay in town when she was intent on moving back to Las Vegas, and that the video would break up Ridge and Brooke for good, and then Shauna could move in on him; but she didn’t want to. She didn’t want to be just the fallback for Ridge when things didn’t work out with Brooke.

The Bold and the Beautiful Spoilers: Sally Using a Walker – Gets More Uncomfortable Sympathy From Wyatt As She Plays It Up #bb #boldandbeautiful https://t.co/LSgiIp59rI

She intended to delete the video but then when her back was turned, Quinn grabbed her phone and sent the video to her own phone, and then sent it to Brooke’s digital photo frame. Viewers of The Bold and The Beautiful will recall that Donna Logan (Jennifer Gareis) and Brooke were alone in Brooke’s living room and she saw it first, and Brooke went to confront Quinn about the video after Donna figured out how to delete it – along with everything else – from the frame, but then Ridge reset it and everything came back – including the video! The preview video picks up from when everyone had left except Donna, Eric Forrester (John McCook) and Quinn, and Ridge has seen it.

Ridge is devastated and angry as he tells an equally devastated Brooke not to follow him, not to come after him or to look for or try to find him as she stands heartbroken, with Donna looking like she’s going to cry in the background, and Eric looking confused and concerned. Ridge rushes to the door past Donna, Eric, and Quinn with a Cheshire cat grin on her face as Brooke cries “Ridge!” as he goes out the door. Meanwhile, Shauna is at home with her daughter Flo Fulton (Katrina Bowden), who she is telling about the situation, “The woman he married wasn’t faithful” as a scene of the steamy video of Brooke making out with Bill Spencer (Don Diamont) runs.

Then there is a scene of Quinn telling Ridge, after he has come to her and Eric’s house, that Shauna is leaving town and Ridge needs to stop her; Ridge goes to Shauna and tells her he can’t lose her; Shauna, however tells him that she can’t be used for him to get over his wife! Ridge looks disappointed, but he should understand if he goes for Shauna that she wants to be loved for herself, and not just be his fallback because things didn’t work out with Brooke!