Days of Our Lives Spoilers: John Tricks Rolf Into Removing Control Chips From Steve and Marlena 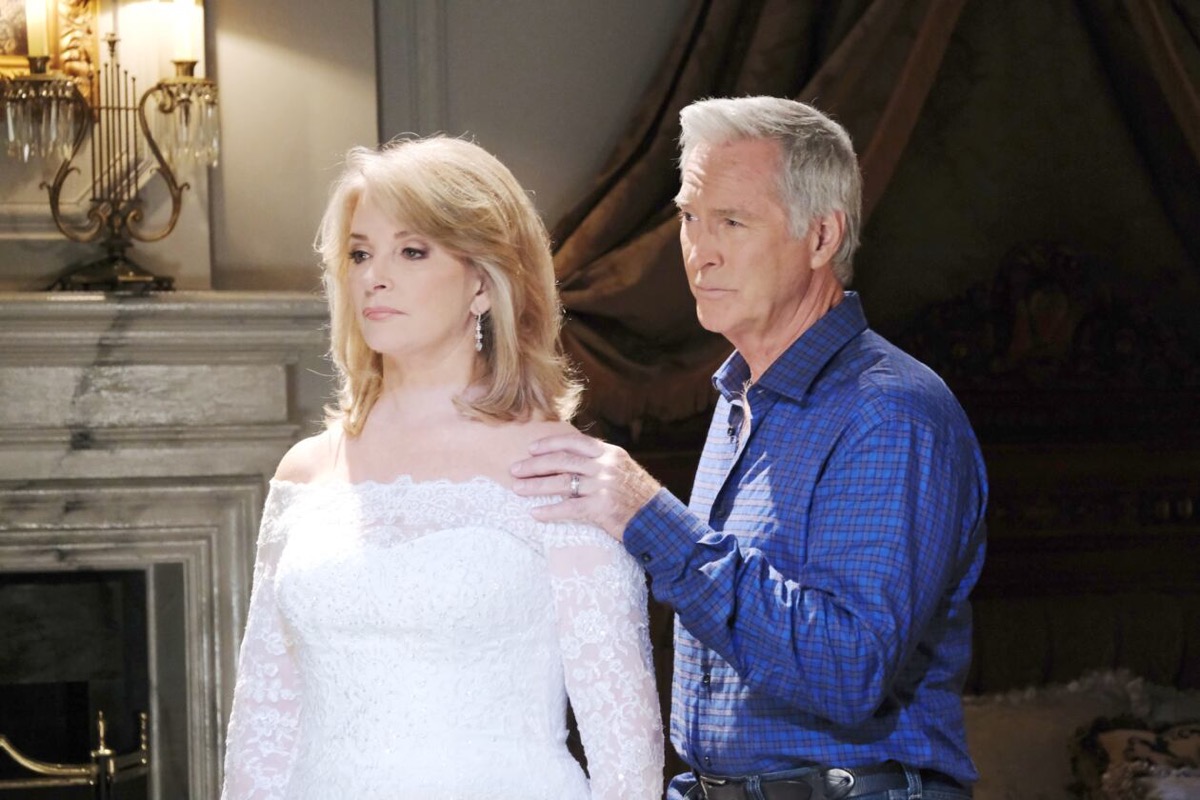 Days of Our Lives spoilers tease that John Black (Drake Hogestyn) will trick Dr. Wilhelm Rolf (William Utay) into removing the control chips from Steve Johnson’s (Stephen Nichols) and Marlena Evans’ (Deidre Hall) brains in an upcoming episode of Days of Our Lives!

DOOL Spoilers: Both Steve Johnson And Marlena Evans Had Control Chips Put In Their Brains By Dr. Wilhelm Rolf

Days of Our Lives viewers will recall that both Steve Johnson and Marlena Evans had control chips put in their brains, although the two were for different purposes. The one in Marlena’s was simply to make her love Stefano DiMera (Stephen Nichols) instead of her husband, John Black and to make her receptive emotionally and romantically to Stefano.

Days of Our Lives Spoilers: Gabi Wishes Stefan Could Share ‘Joy’ With Her – Gets Unexpected Miracle?

The chip in Steve’s brain was to turn him into Stefano DiMera in the way that Hope Brady (Kristian Alfonso) was turned into Princess Gina Von Amberg (Kristian Alfonso) for over a year, changing her memories, her attitudes, her feelings, desires and behaviors into Princess Gina; this is what has happened to Steve as Stefano. He knows nothing of his life as Steve Johnson other than what Stefano DiMera knew about him and his life.

Rolf, under police guard, was forced to take the chip out of Hope’s brain, but he still had to get permission from Stefano. Getting him to remove the chips from Marlena’s and Steve’s brains may take a considerable amount of doing – and John realizes that he is going to have to trick Rolf into thinking that Stefano has authorized these operations. John managed to get through to Marlena in Monday’s Days of Our Lives episode, but Rolf will still want Stefano’s authorization to even operate on her!

Dr. Kayla Brady (Mary Beth Evans) oversaw when Rolf operated on Hope so she knows somewhat what to do, but she is still leary of trying to perform such a delicate procedure on her own, since Rolf invented and perfected the technique! Even if she were to perform the procedures she would still feel Rolf should oversee the operations.

Days of Our Lives Spoilers: John Black Has Samples Of Stefano’s Handwriting

John has samples of Stefano’s handwriting – he could produce a forged letter instructing Rolf to remove the chips. But Rolf may be too suspicious and skeptical to believe Stefano would have written such a letter. As Anna DiMera (Leann Hunley) removed one of “Steveano’s” eyes with a well placed stiletto heel in an effort to save her husband Tony DiMera (Thaao Penghlis) he is in the hospital recovering from the loss of the eye.

It was not viable, the stiletto heel completely burst the eye itself and even the most skilled eye surgeon would not have been able to replace it! He would have means to record a permission from Stefano in his voice, which is another of the features of the chip in his brain, but it may take many, many recordings to get the right words to edit together into a cohesive recorded statement!

Rolf has to know that Stefano approves before he will do anything! He decides to try and taunt “Steveano” into giving his permission, recording, and editing it so that Stefano appears to give permission to remove the chips. It takes a few tries, but he is able to get a believable recording and plays it for Rolf – and gets his commitment to remove the chips, overseen by Kayla and a police guard, of course.