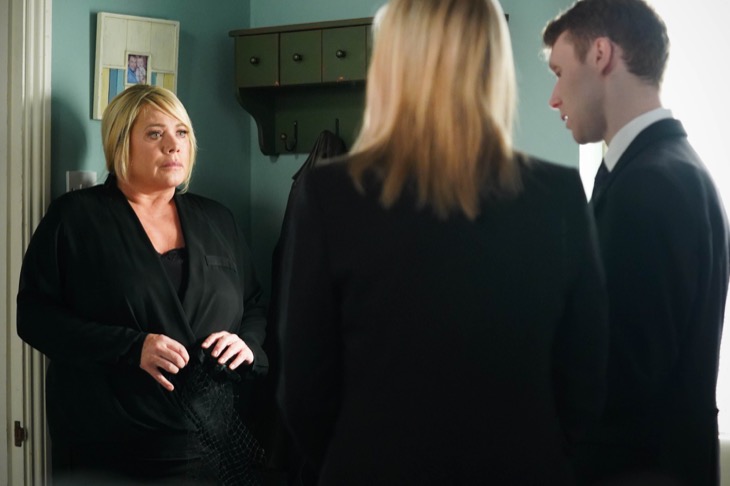 EastEnders hint that after being told that they can not attend Denny’s funeral, the Mitchells will decide to crash the funeral. A grieving Sharon Mitchell (Leticia Dean) has decided not to let any of the Mitchells go to the funeral. However, this will not work since they will show up anyways. How will Sharon react to the Mitchell Funeral crashers?

Sharon is grieving from the death of her son, Denny Rickman (Bleu Landau). After finding out that his body has been released, Sharon’s grieving and bad decision making have gone up. So when the day of the funeral comes around, she makes it clear that she does not want the Mitchells to attend the funeral, and they were banned. However, wanting to show respect to Denny and remember him, so instead of staying away from him, Ben Mitchell (Matthew Silver) decides to go to the funeral. This will not go as planned, however, as Sharon will be heated to see that a Mitchell has shown up to her son’s funeral even after she told them not to.

Ben will not be the only one who decides to go to the funeral as Phil Mitchell (Steve McFadeen) will come back into town as well. Sharon will be upset to find out that Phil is back into town as she blames him for the death of her son. This will set Sharon off as she attacks Phil, causing Ian as well as Kathy to step in. They call the police as things continue to escalate.

However, Phil does a disappearing act until they bump into each other later. That is when Sharon makes a decision, what could this be? Phil is in town with a goal in mind; however, whatever it is, it will upset Ian Albert Beale (Adam Woodyatt). As viewers know, Ian is trying to hide his involvement in the death of Denny.

It seems that Sharon will continue to have a hard time handling her son’s death, while Ian works to cover his tracks. What do you think? What will be Sharon’s decision, and what will be Phil’s reason for coming back into town? Watch EastEnders from Monday and Friday at 8 pm and Tuesday and Thursday at 7.30 pm on BBC One to find out what happens next.