General Hospital Spoilers: Could Taggert Be the Person Jordan Was Talking To On The Burner Phone? 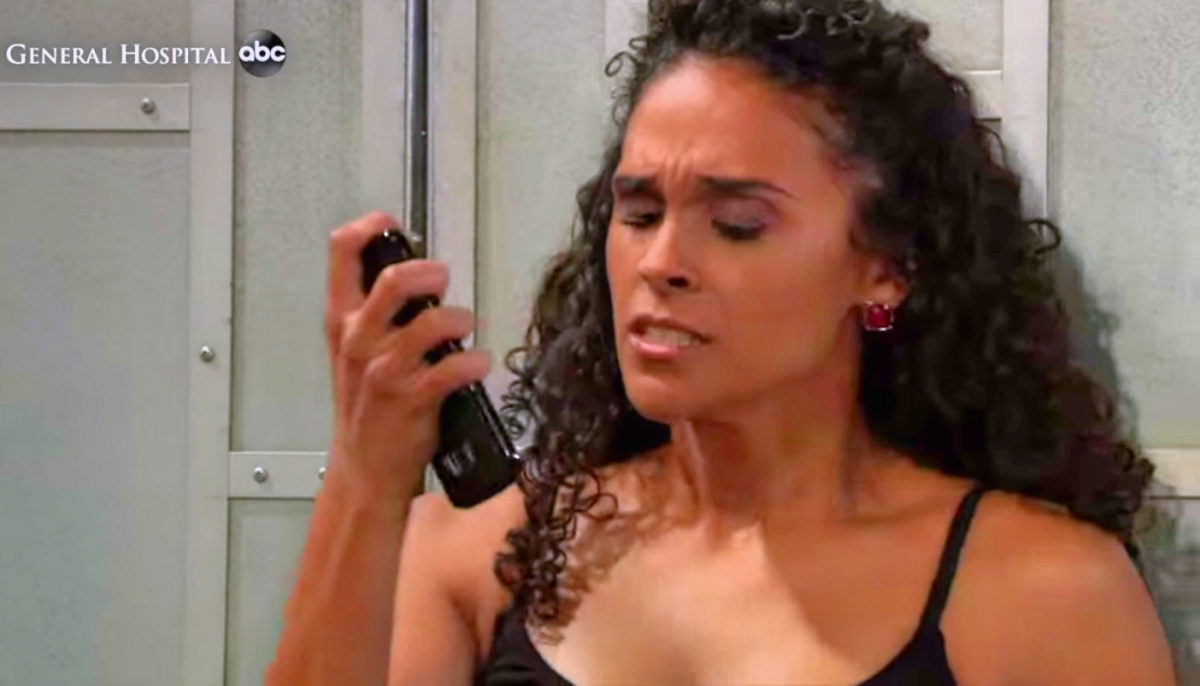 General Hospital (GH) spoilers suggest that Jordan Ashford (Briana Nicole Henry) may just have been talking to a dead man. As GH fans know by now, criminal mastermind, Cyrus Renault’s (Jeff Kober) thugs killed Jordan’s former partner, Marcus Taggert (Réal Andrews) in a shootout. Yet, there are those who believe Jordan may know something the rest of Port Charles does not!

Is there a secret at play that GH fans haven’t suspected? General Hospital spoilers suggest that this may be the case. That’s because GH viewers recently saw Jordan head into her office after working with mafia enforcer Jason Morgan (Steve Burton) to get the details of her story straight. GH fans may recall that Cyrus Renault has kidnapped Jordan’s son, TJ (Tajh Bellows) and is holding him hostage. Jordan’s been running around Port Charles wailing, moaning, and groaning … pulling her hair out looking for a way to get her kid back. However, Jordan’s seemed ineffectual to say the least.

Cyrus has black mailed her, and if Jordan wants to see TJ alive again, she’s going to have to get Cyrus released from Pentonville Prison. In fact, he isn’t just supposed to be released, he’s got to be completely exonerated. Of course, this is because Jordan originally planted evidence to get Cyrus arrested and convicted in the first place! For that to happen, Jordan would have to confess to breaking the law, and the result would likely be a trade. Cyrus goes free and Jordan goes to prison.

Thankfully, Sonny Corinthos (Maurice Benard) is smarter than that. Together with Jason, Sonny came up with a plan to get TJ back, get Cyrus released, and for Jordan to keep her job as Port Charles’s police commissioner. All Jordan has to do is throw her former DEA partners (who are all apparently dead) under the bus.

With that said, there are GH fans who have suspected that Taggert is still alive, and that he and Jordan are conspiring together. What that conspiracy involves, if it exists, is anybody’s guess now.

Not that long ago, GH viewers watched Jordan finish a conversation with Jason and then walk into her office. There, Jordan dug out a burner phone, which she’d hidden in a cabinet. Jordan called a mysterious person. Who that person is, no one knows. However, some GH fans are already certain that this enigmatic individual is Taggert.

The reason for the suspicion some GH viewers have for this is that Jordan needed that person to tell her, “it’s okay.” In the context of everything Jordan said, it was clear the person on the other end of the line knew what Jordan was planning!

In terms of blaming her former DEA partners for the crime of framing Cyrus Renault, Jordan doesn’t need her husband Curtis Ashford’s (Donnell Turner) permission. After all, GH viewers will recall that Curtis is totally on board with whatever it takes to get TJ back safely. Curtis is also down for doing whatever is necessary to remove Cyrus as a threat. Jordan already has his support.

Jordan doesn’t need feel good fuzziness from Sonny or Jason either. Both Sonny and Jason are criminals in their own right and apparently, both men feel fine with having Cyrus Renault murdered once he is out of Pentonville. After all, Cyrus is a threat to Sonny’s family as well as his business. When it comes to blaming Jordan’s former partners at the DEA for the framing of Cyrus, well … that was Sonny’s idea in the first place! Jordan doesn’t need Sonny or Jason to tell her “It’s okay.”

Jordan wouldn’t be asking Trina Robinson (Sydney Mikayla) or her mother, Portia Robinson (Brook Kerr), for either to tell her “it’s okay” either. It just doesn’t make sense!

Through a process of elimination, GH fans might infer that Jordan simply had to be speaking to Taggert! Of course, this begs a few questions. Why did Taggert fake his death? What purpose did it serve? Why has Jordan been hiding the truth for so long?

Perhaps Jordan is actually a genius? (That would certainly take a lot of GH viewers by surprise.) Could Jordan and Taggert have formulated a plan that would get TJ back, remove Cyrus Renault as a threat for good, and potentially bring the Corinthos crime family down all at the same time?

Could Jordan actually be the best police commissioner Port Charles has ever seen? One wants to say, “Yeah right,” at this point. However, stranger things have happened on General Hospital!