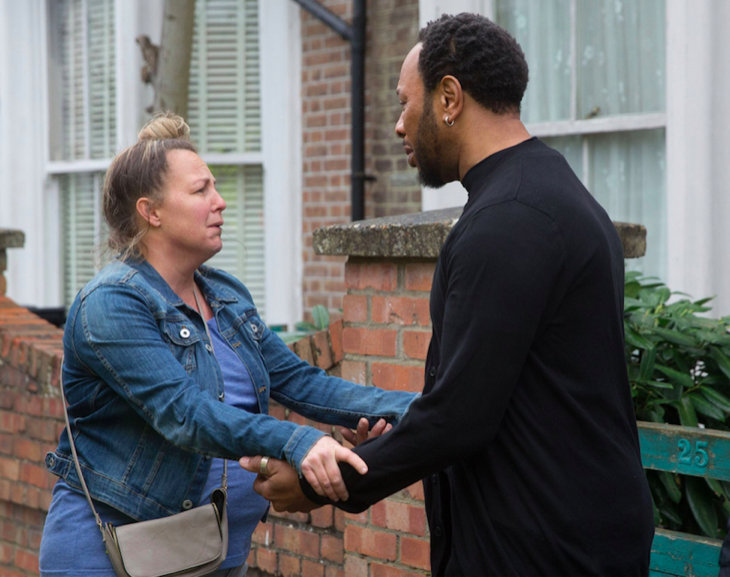 Eastenders spoilers reveal that Mitchell “Mitch” Baker (Roger Griffiths) learns about Karen Taylor’s (Lorraine Stanley) decision about moving from Albert Square. He makes a suggestion that could destroy her current relationship. Plus, expect Mitch to make a bombshell confession. Keep reading to find out what to expect from this storyline.

Now, it seems that the blackmailed will turn into a blackmailer. He offered Karen a large sum of money to take Sharon Mitchell’s (Letitia Dean) newborn, Kayden Taylor and move away. It appears that she has made a decision and the offer is too good to pass up.

Eastenders spoilers reveal that after learning about Karen’s plan, Mitch will try and come up with a plan to remain close to her. He ends making a suggestion, which she takes into consideration. However, it could mean more trouble for her relationship with Billy Mitchell (Perry Fenwick).

Even though the Taylor family was divided about what to do about Ian’s offer, Karen seems to have made up her mind by next week. She has already begun the process of preparing for the big move. This upsets Mitch and it’s clear he’s affected by the idea of not seeing Karen each day. So, he suggests that he and daughter Bailey Baker (Kara-Leah Fernandes) move with Karen.

However, this might not sit well with Billy and it could cause friction in his relationship with Karen.

Eastenders spoilers also reveal that Mitchell will drop a truth bomb on Karen that leaves her stunned. There are no clues on what it could be, but might it have something to do with Gray Atkins (Toby-Alexander Smith) and Chantelle Atkins (Jessica Plummer)? Or could this have something to do with Sharon, Ian, Phil Mitchell (Steve McFadden), or even Keanu Taylor (formerly Danny Walters)?

What do you think Mitch will confess to Karen and how could it affect their relationship? Will Karen take her ex up on his offer to move away with her? What will the future hold for the former flames, as well as Ian, Sharon, Billy, and baby Kayden? Fans will have to keep watching the soap to see how this storyline develops.