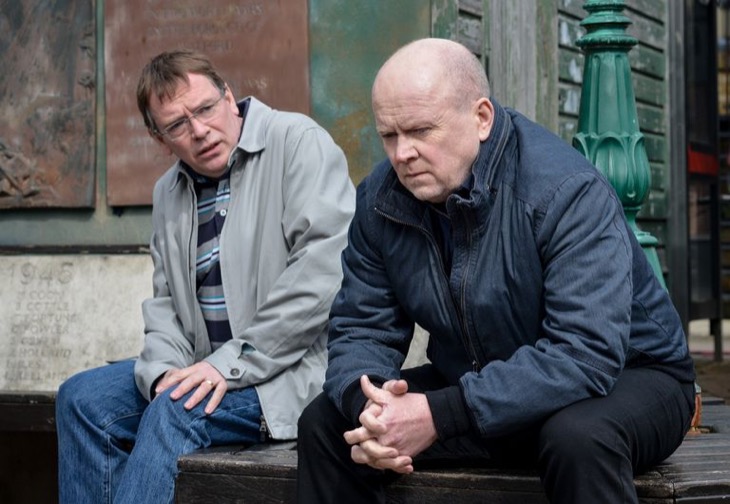 Eastenders spoilers reveal that Phil Mitchell (Steve McFadden) will be questioned by police about his role in Dennis Mitchell’s (formerly Bleu Landau) death. Even though he started the chain of events that led to the boat tragedy, Dennis’ death was actually the fault of Ian Beale (Adam Woodyatt). Will the guilty man Phil step forward and admit to the truth, or allow Phil to take the fall for the boy’s death?

Now going back to her maiden name, Sharon Watts (Letitia Dean) prepared to lay her older son to rest. However, she wasn’t expecting Phil to show up at the Mitchell-banned funeral. Furthermore, she also never expected him to chase her around and kick down a bedroom door in order to force her to listen to what he had to say.

It will ultimately lead to a grief-stricken Sharon to try and lunge at Phil with a knife.

Eastenders spoilers reveal that after seeing the depths of Sharon’s fury, Phil will understand what he needs to do. He tells Ian about his plan, which shocks him. It is speculated that Phil might turn himself into police and tell them that he was the person responsible for the boat tragedy, and Dennis’ death.

On Tuesday’s episode, Phil will be questioned by police about the events that took place during the 35-anniversary episode. He is doing this not just for Sharon, but to alleviate his own guilt. As fans may recall, when Phil saw the first responders were unable to revive Dennis, he fought back tears. However, he’s not the only person responsible for the young man’s death.

Will Ian Beale Let Another Take the Blame?

Eastenders spoilers reveal that Ian will face a huge dilemma. Will he confess to his part in Dennis’ death and tell Sharon that he locked the boy in the room, which flooded? He tried to unlock it at one point but lost the key. Therefore, it seems like Ian should be held accountable. The boy would have likely survived the boat tragedy if Ian hadn’t’ done that.

Or will he continue keeping his secret? With Dotty Cotton (Milly Zero) continuing to blackmail Ian and with him bribing Karen Taylor (Lorraine Stanley), it seems that it’s only a matter of time before the truth comes out. Fans will have to keep watching to find out what happens with these characters and the storyline.