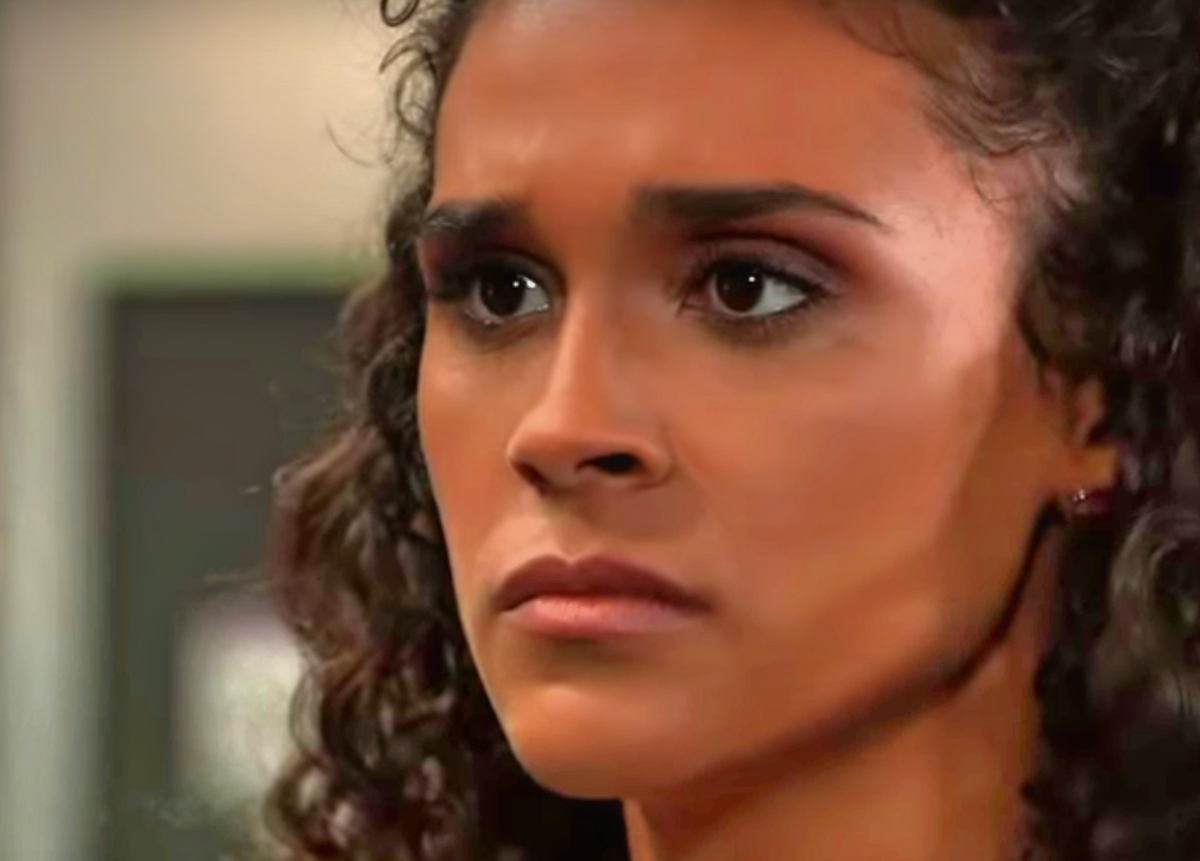 General Hospital (GH) spoilers recap for Tuesday, March 31, reveal that Cameron Webber (William Lipton) and Trina Robinson (Sydney Mikayla) chatted in the park. They talked about how Cameron has Franco Baldwin (Roger Howarth) to talk to, and how Trina has Ava Jerome (Maura West). Cameron noted that Trina should be careful around Ava, since Josslyn Jacks (Eden McCoy) doesn’t trust her.

Trina then got a text from Josslyn, prompting Cameron to awkwardly ask if Trina had told Josslyn about their kiss the other day. Trina said no, and Cameron was relieved. Cameron and Trina chalked up their kiss to being traumatized, then took off for the hospital so go see their moms.

At the PCPD, Laura Collins (Genie Francis) approached Mac Scorpio (John J. York), who shared that Jordan Ashford (Briana Nicole Henry) was in a meeting. They discussed Cyrus Renault (Jeff Kober) briefly, and Laura insinuated there could be a dirty cop on the force, unnerving Mac.

Meanwhile, in the interrogation room, Jordan told the Internal Affairs agent about her involvement with the arrest and conviction of Cyrus, stating that she recently realized discrepancies in the evidence. Jordan stated that she believed the other three members of her task force may have fabricated material evidence used to convict Cyrus.

Jordan and the Internal Affairs agent exited the interrogation room to find Mac and Laura there. Laura demanded to know what was going on, but Jordan said it would have to wait. “It’s about me and Cyrus,” Jordan said, then walked off. Laura then got on the phone and learned that the DOJ had requested a complete review of Cyrus’ conviction because Marcus Taggert (Real Andrews) and two other agents planted evidence.

Mac was horrified and said he couldn’t believe it. Laura said that if Jordan thinks it’s a possibility, then they have to take it seriously. Both Laura and Mac wondered why Jordan didn’t share this with them before going to Internal Affairs. Laura told Mac that if there’s something else going on, then she wants him to find it.

Next, at Julian Jerome’s (William deVry) place, Britt Westbourne (Kelly Thiebaud) and Julian enjoyed some alone time together, although Britt reminded Julian that at the end of the day, they go their separate ways. They briefly discussed Liesl Obrecht (Kathleen Gati) and Brad Cooper (Parry Shen), and pretty soon Julian mentioned something about Alexis Davis (Nancy Lee Grahn) and her therapist Neil Byrne (Joe Flanigan).

Britt then remembered where she had seen Neil – it was in New York City when she was in a hotel. Britt recounted how she saw Neil go to Alexis’ hotel room and fall into her arms. Julian was horrified and ranted about how therapists have rules against these things and Neil took advantage of Alexis. Julian decided to head to GH, and Britt asked for a ride.

At GH, Hamilton Finn (Michael Easton) and Alexis hung around after an AA meeting, and Finn said that he was sorry he missed Alexis’ call last night. He noted that Alexis had picked up a 24-hour sobriety chip, and Alexis filled him in about some of the reasons why she drank, including Sam McCall (Kelly Monaco) calling her a coward and her desire to be with someone unattainable.

Suddenly, Neil showed up looking for a staff meeting, and Finn asked for Neil and Alexis’ advice about a patient. Both Neil and Alexis were distracted by memories of their night at the hotel together while Finn rambled on. Finn left, then Alexis revealed to Neil that she drank last night. Julian then burst in the room and shoved Neil up against the wall forcefully.

Over in Portia Robinson’s (Brook Kerr) office, Curtis Ashford (Donnell Turner) fished for information, to find out if Taggert had told Portia anything material about the DEA task force that had put Cyrus away. Portia didn’t seem to know anything. Jordan then arrived, saying that she had news for Portia, and that the DOJ was investigating Taggert’s handling of the case against Cyrus.

Portia had a lot of questions, and she said that if Taggert and the others had bent the truth, then it would explain a lot of the problems they had in their marriage – in particular, if Taggert had violated his own code of honor, then it would have eaten him up inside. Portia then realized that she needed to tell Trina all of this before it hit the news. Suddenly Trina arrived and immediately got agitated to see Curtis and Jordan there.

At the Metro Court, Ned Quartermaine (Wally Kurth) met with Brook Lynn Quartermaine (Amanda Setton), who was on cloud nine because she was going back on stage soon. Ned wondered how this could be, given her contract with Linc Brown (Dan Buran). Brook Lynn said that she found a way, but she didn’t tell Ned that she forked over her ELQ shares. Brook Lynn then took a call from her new PR person.

Over at another table, Lulu Spencer (Emme Rylan) sat with Dustin Phillips (Mark Lawson), and they were kissing when Olivia Quartermaine (Lisa LoCicero) came up and gave Lulu grief for trashing the restaurant in her brawl with Brook Lynn. Lulu then asked Dustin for his take on the matter, and he gently said that it seemed like Lulu published the story about the ELQ merger just to get back at Brook Lynn.

General Hospital Spoilers: Brook Lynn Shared That Her Career Was Back On Track And That She Was Going To Launch Her Rebrand

Lulu said that Dustin was right, and she called Brook Lynn over to their table. Brook Lynn shared that her career was back on track and that she was going to launch her rebrand at this year’s Nurses’ Ball. Lulu then apologized for how she handled Brook Lynn’s social media slip-up and for spraying Brook Lynn with champagne. Brook Lynn said that she accepted the apology, but that she wanted Dustin in return.

Finally, at Ned’s table, Olivia joined him and asked how Brook Lynn had managed to get out of her contract with Linc. Ned said he didn’t know, and that maybe his tough love forced Brook Lynn to get her life back on track. Olivia said that there was probably some lie, scheme, or an epic machination that’s about to blow up in everyone’s face.

That was a great episode of General Hospital, and there’s more coming, so be sure to stay tuned! Don’t forget to consult HH regularly for the latest GH spoilers and news. We’ll keep you updated as more sizzling spoilers come in!