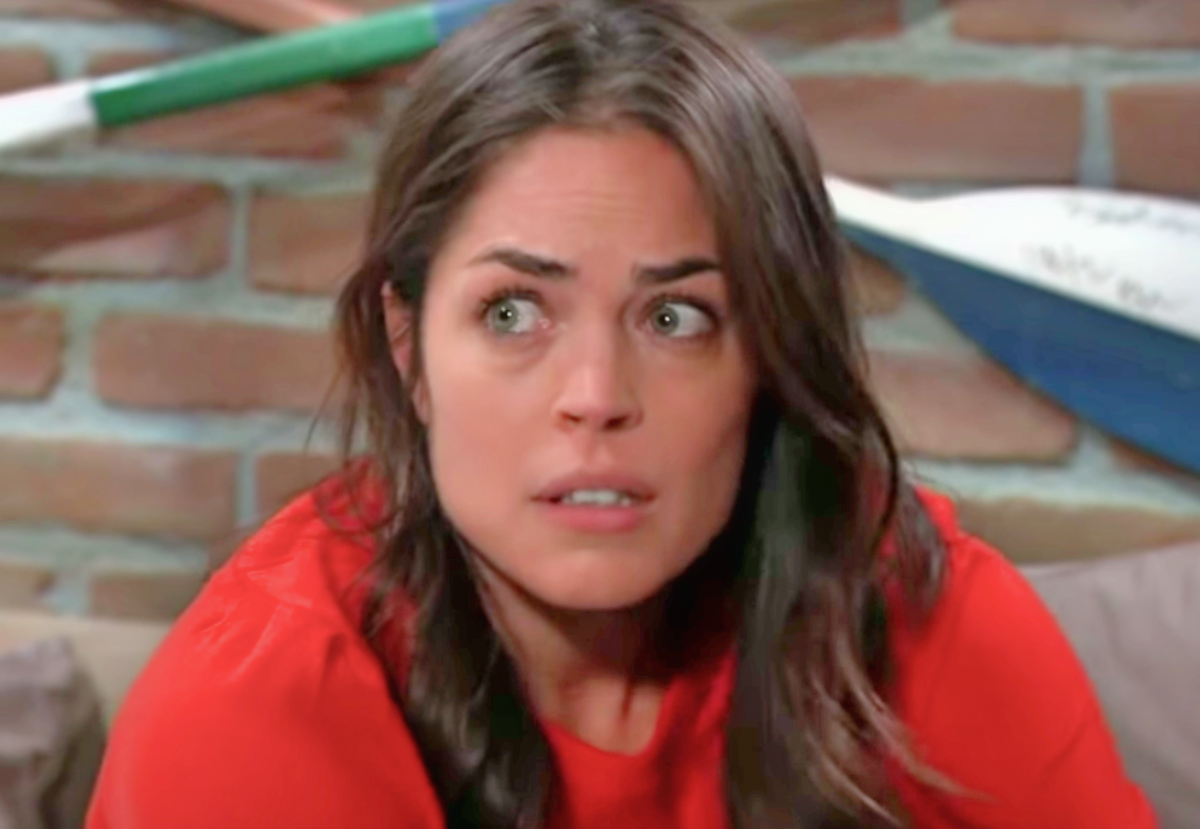 General Hospital (GH) spoilers recap for Wednesday, April 1, reveal that Brando Corbin (Johnny Wactor) was doing crafts with Avery Corinthos (Ava and Grace Scarola) in the Corinthos kitchen when Carly Corinthos (Laura Wright) entered. After Avery left, Carly noted that Brando was great with the little girl, and the two chatted about Brando uprooting his life. Brando seemed to be happy with his new life in Port Charles.

Through their conversation, Brando talked a bit about his life with Gladys Corbin (Bonnie Burroughs), noting that he would sneak out of the house and go to the library to read about horses. Brando recalled about how Mike Corbin (Max Gail) used to come around and they’d spend time at the track together. Carly suggested that Brando accompany her to GH to visit with Mike.

Meanwhile, at the hospital, Trina Robinson (Sydney Mikayla) was upset to learn that Jordan Ashford (Briana Nicole Henry) had discovered that Marcus Taggert (Real Andrews) tampered with evidence to send Cyrus Renault (Jeff Kober) to prison. Trina insisted that her dad would never do this, and Cameron Webber (William Lipton) stepped in to calm her down.

General Hospital Spoilers: Could Alexis Decide to Confide in Neil – And Make a Decision to Fight for Him?

Trina persisted, saying that everyone was trashing her dad’s reputation, and Portia Robinson (Brooke Kerr) tried to tell her that the story would soon be out. Trina was horrified to learn that Jordan had notified the justice department about the matter. Portia wanted to take Trina home, but Trina refused and ran out, with Cameron going after her.

Out in the hallway, Sonny Corinthos (Maurice Benard) asked Felix Dubois (Marc Anthony Samuel) about Mike’s condition. Felix said that Mike was not medically impaired, but rather he was scared to walk because of the fall he took. Sonny headed to Mike’s room, where he asked his father to try to walk. Mike didn’t want to even try, and he yelled at Sonny to leave.

Sonny then talked softly to Mike about how he’s got to try to walk, and he told Mike a story about a boy who wanted a bike but was afraid to ride it for fear of falling. Mike listened and fell asleep as Sonny went on about how the boy’s father taught him to ride. In tears, Sonny told Mike that he was there for him, and Mike finally woke up and agreed to give walking a try.

Sonny and Mike walked the hallway together, with Mike not recognizing Sonny at this point. Carly and Brando then walked in, and Mike looked at Brando and said, “No, this can’t be. You’re dead.”

Over in a meeting room, Julian Jerome (William deVry) manhandled Neil Byrne (Joe Flanigan), yelling that he was never going to practice medicine again. Julian called Neil a twisted predator, and a crowd gathered at the door, listening to everything that was going on. Alexis Davis (Nancy Lee Grahn) yelled at Julian to stop, and Julian bellowed out that Alexis had neglected to mention that she slept with Neil.

Felix then came in the room and told everyone to duke this out elsewhere because they were disturbing patients with their altercation. From there, Neil, Alexis, and Julian went to Neil’s office. Alexis blasted Julian for accusing Neil in front of everyone, and Julian said that Britt Westbourne (Kelly Thiebaud) had seen them in New York City. Julian blasted Neil for making Alexis drink again, and Alexis threw Julian out of the room.

GH Spoilers: Britt Westbourne Tracked Down Julian Jerome And Asked Him What He Was Thinking Losing

Neil then turned to Alexis and asked if she drank last night because of him, and Alexis said that she drank because she and Sam McCall (Kelly Monaco) had a fight. Neil wondered why Alexis hadn’t called him for help, and Alexis said it was because they weren’t supposed to be talking to each other. Neil noted that Julian’s very public accusation spells big trouble for them.

Out in the hall, Britt tracked down Julian and asked him what he was thinking losing it like that. Julian said that Neil deserved worse, and Britt accused Julian of still loving Alexis. Julian denied it, but he said that it kills him to see anyone hurting Alexis. Britt said that things were now over between the two of them.

Next, outside of Kelly’s, Valentin Cassadine (James Patrick Stuart) talked with someone on the phone, saying that Brook Lynn Quartermaine’s (Amanda Setton) ELQ shares were now officially his. Inside Kelly’s, Charlotte Cassadine (Scarlett Fernandez) and Nina Reeves (Cynthia Watros) hugged, then Nina asked Charlotte if Jasper “Jax” Jacks (Ingo Rademacher) could join them.

Nina, Jax, and Charlotte talked for a moment, then Charlotte joined a friend of hers at the counter. Nina told Jax that she hired Nelle Benson Archer (Chloe Lanier), which worried Jax. Valentin walked in and requested a word with Nina outside. Valentin told Nina that he hoped she enjoyed her time with Jax while it lasted, and that he was sorry for what he had done to her.

General Hospital Spoilers: Brook Lynn Told Dustin Phillips That She Wanted Him To Write Some Material For Her

Valentin gently said that he’d be there waiting for her if things go badly with Jax. Nina was unnerved, then went back into Kelly’s where she found Jax on the floor, having just tripped. Jax claimed to have tripped on accident, and Nina gazed over at Charlotte, who looked guilty.

At the Metro Court, Brook Lynn told Dustin Phillips (Mark Lawson) that she wanted him to write some material for her, so that they could collaborate on a song together. Dustin said that he’d have to think about it, and after Brook Lynn left, Lulu Spencer (Emme Rylan) told Dustin that he should write Brook Lynn a song because it would be a great opportunity for him…but that he should watch his back.

Brook Lynn then bumped into Valentin as she was approaching the elevators. Valentin said that it looks like they were both so busy going where they were going that they missed what was right in front of them. Brook Lynn said that those would be good lyrics, and Valentin just smiled.

There’s definitely a lot going on right now on General Hospital, so stay tuned! Stick with the ABC soap and keep Hollywood Hiccups bookmarked for all the latest General Hospital recaps and spoilers. We’ll let you know as more GH news comes in.