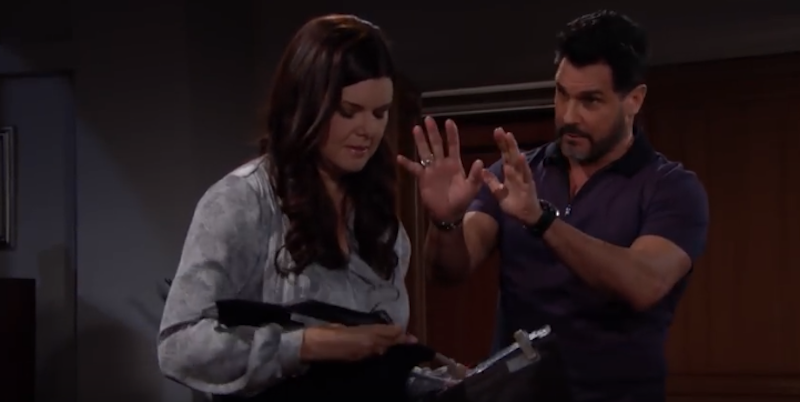 The Bold and the Beautiful spoilers reveal that at some point, there must have been a secret quickie “Batie” wedding. The writers keep calling Katie Logan (Heather Tom) the wife of Bill Spencer (Don Diamont). However, was there a wedding that we missed? Nobody seems to remember them getting married after they got back together. So, what’s the deal? Fans are calling writers out on the issue.

B&B spoilers reveal that Bill has a long and complicated romantic history. He has been with several women on the show. Besides Katie, he has history with Brooke Logan Forrester (Katherine Kelly Lang), and of course, he has a grown child with Quinn Forrester (Rena Sofer).

B&B Spoilers: Breaking Up Is Hard To Do

Bill and Katie have been on-and-off for quite a long time. They even have a son together, but he always had a wandering eye. Plus, Bill and Brooke betrayed Katie on at least three different occasions. There was also the full-on affair “Brill” had.

The Bold and the Beautiful spoilers reveal that Bill and Katie quickly got back together after the last split. They planned on getting married, but then Katie ended up going through kidney failure. In the hospital, a doctor called the young woman “Katie Spencer.” As we previously reported, there was confusion over whether they had a quickie wedding off-screen or not.

The Bold and the Beautiful Spoilers: Is Katie Logan Married or Not?

Even though she is referred to on-screen as Katie Spencer, to fans’ knowledge, they didn’t get married, at least not yet. Plus, Ridge Forrester (Thorsten Kaye) referenced that the couple were married during the “Brill” kiss exposure.

However, in a recent issue of Soap Opera Digest, actor Don Diamont explained why “Batie” was “gun shy” about making their union official. So, that indicates that they aren’t married.

Hot Bold And The Beautiful Spoilers: Katie Cuts Brooke Out Of Her Life? Heather Tom Respondshttps://t.co/JYAORkvsIS

Fans are reacting on social media. The issue was brought up on the Facebook page, Queen Steffy Forrester B&B,

“…They got back together, then Katie had her health issue, then they disappeared. Unless they had a quickie wedding offscreen…🤷🏻‍♀️”

“…No, Bill and Katie are not married. Or did Bell get them married off-screen? 😕🤷‍♀️”

“… Wth..here they going again with this marriage stuff? Help me out #TeamSteffy. Are Bill and Katie married?”

Perhaps Bill and Katie had an off-screen wedding, but shouldn’t that be mentioned at some point? Tell us what you think about writers “forgetting” that “Batie” are not married.