General Hospital Spoilers: Julian Wants To Protect Alexis – But What About Britt? 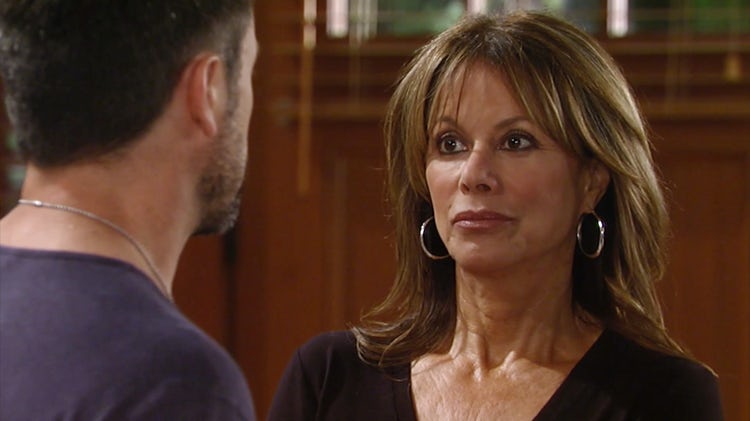 Although Julian’s current love interest (who subsequently broke up with him) suggested that Julian still loves Alexis, Julian made haste to deny it. From Julian’s point of view, at least the view he’s willing to admit to, he simply hates the idea that a creepy psychiatrist took advantage of Alexis. However, what if his lover, Britt Westbourne (Kelly Thiebaud) was right?

What if Julian’s motivation had nothing to do with protecting Alexis from Neil? Could jealousy have spurred Julian’s reaction to the news of Alexis’s affair?

Now, Julian admitted to Britt that the reason for his behavior was that because – he had hurt Alexis badly – now he cannot abide seeing Alexis suffering at the hands of any man. With that said, Julian may not recognize it, but despite his words to Britt, his behavior displayed classic signs of jealousy.

The truth is, Julian and Alexis’s relationship has evolved to the point where they’ve been good friends for quite some time now. Not only has Julian come running when Alexis has needed him, but he shares a daughter and grandkids with Alexis. Julian and Alexis have significant history together. It may not be so strange then, that in the back of Julian’s mind the two are more connected than he’d care to admit.

Hearing about Alexis’s affair with Neil may have genuinely upset Julian for some of the reasons he stated. It really is unethical for a psychiatrist to take advantage of an emotionally vulnerable patient … former or otherwise. However, the entire situation could simply have been triggering for Julian. Despite years apart and despite the fact that he, himself, is in the midst of a sexual relationship with someone else … it’s possible twinges of insecurity and jealousy reared their heads. Unfortunately, GH viewers know that Julian’s subsequent actions appear to have traumatized Alexis.

General Hospital Spoilers – Alexis and Julian Will Patch Things Up

GH viewers might agree that Julian could have avoided the entire explosive moment in General Hospital where he confronted Neil and exposed Alexis’s affair with the doctor. After hearing that Alexis had slept with Neil, Julian could simply have had a private conversation with Alexis. He could have had a respectful conversation where he attempted simply to assure himself that Alexis was okay. He could have remembered that Alexis is an adult who is fully able to make her own decisions … and her own mistakes.

In the end, while Julian and Neil may never become friends, it’s likely that at some point Alexis will forgive Julian for roughing up her lover and exposing their affair. After all, GH fans know that Alexis has forgiven him for far worse in their past.

GH viewers may agree that at this point, Julian may need to give Alexis some space and focus on his own relationships moving forward.