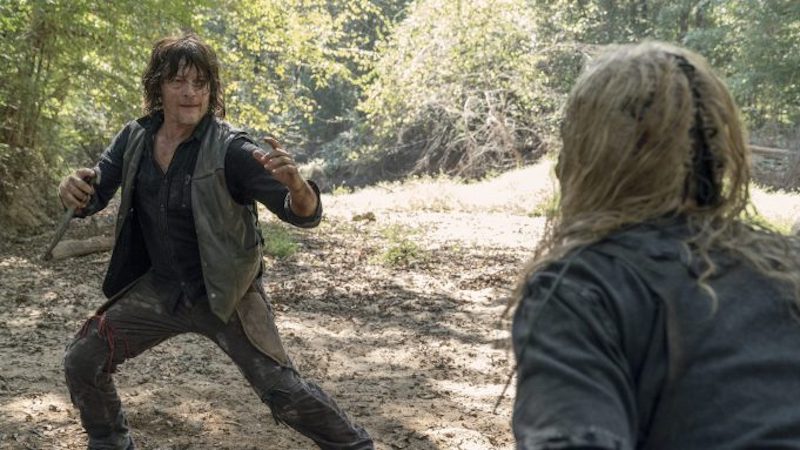 The Walking Dead: Season 10, Episode 15 sneak peek is officially out. AMC just released the promo video for the upcoming episode.

[Warning: This article discusses Season 10 of AMC’S The Walking Dead. Go back home if you have not watched all the available episodes and want to avoid spoilers.]

The trailer for Episode 15 of The Walking Dead Season 10 shows Daryl Dixon (Norman Reedus) interacting with Judith Grimes (Cailey Fleming). This led to the rumors that Rick Grimes (Andrew Lincoln) is still alive. The Episode 15 trailer seems to hint that Judith will reveal to Daryl that Rick could have survived his accident on the bridge, as seen in Season 9 of The Walking Dead.

During the clip, the two are seen walking in the woods. Judith asks Daryl for his help.

Survivor: Winners at War, Episode 8: Did Rob And Natalie Make The Right Decision With Their Fire Tokens? What Jeff Probst Thinks https://t.co/tftOBSbD0Z

“I want to learn what you do,” Judith tells him in the clip. “How to keep us safe.”

The clip then shows Judith learning how to effectively kill walkers. This scene is shown in the trailer for a reason. If Judith is with Daryl, then it means that she revealed to him about her conversation with Michonne during Episode 13 of The Walking Dead. The episode ended with Michonne saying that she found evidence that proved that Judith’s father, Rick, is still alive.

She ends up trying to find him on her own, marking her exit from the series. It also hints that the character could appear in the trio of movies planned by AMC. The movies are said to reveal what happened to Rick when he was rescued by Jadis/Anne (Pollyanna McIntosh).

As per Comic Book, Daryl searches for Rick after his disappearance, which he considers a mystery. Daryl is known for his keen tracking skills. He founds it frustrating that he can’t locate Rick’s whereabouts.

“He’s a master tracker, he can get you from here to there no problem, he’s very intuitive and he’s very observant, and he just can’t find it,” Reedus said during an episode of Talking Dead. “It makes no sense to him.”

It’ll be interesting to see how Daryl reacts to this news. Viewers will have to tune into Episode 15 to find out more.