Days Of Our Lives Spoilers: Kayla Determined To Fix Steve – Even If It Kills Him 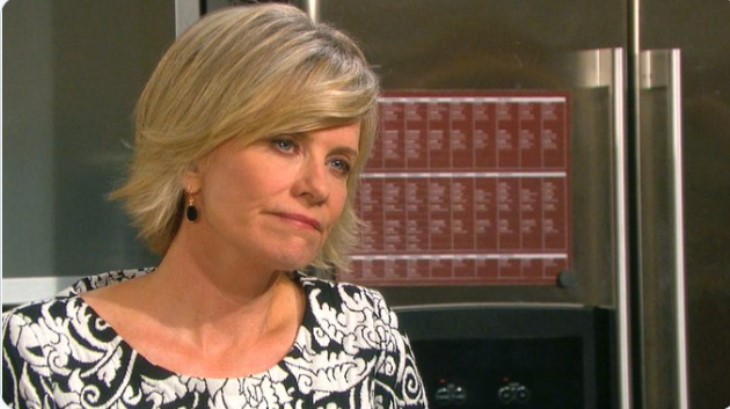 Days of Our Lives spoilers reveal that Dr. Kayla Brady (Mary Beth Evans) is determined to bring back Steve Johnson (Stephen Nichols), even if it kills him. The predicament forces her to make a bold decision. However, she knows what she must do to get out of the brain chip. However, the surgery goes horribly wrong. Will Steve ever be the same again?

DOOL spoilers reveal that Kayla is bound and determined to get Stefano DiMera’s essence out of Steve’s mind. This means that the brain chip has to be removed. Despite trying to convince Dr. Wilhelm Rolf (William Utay) to do the right thing, the mad scientist will not betray his boss. This puts Kayla in the tough position of making a decision about Steve’s life.

In the latest issue of Soap Opera Digest, actress Mary Beth Evans explains that she confronts “Steve-ano” and lets him know hat she’s serious about getting back the real Steve. She is so determined to get that brain chip out that she’s willing to do it even if it kills the man.

“Yes, there’s a risk, but she knows that Steve would hate [being Stefano] if he knew about it, that he wouldn’t want this for himself.”

Days of Our Lives spoilers reveal that Kayla and Dr. Sarah Horton (Linsey Godfrey) go to work to extract the brain chip. However, there are unexpected complications. Kayla is forced to make a split-second decision, but it could lead to devastating results.

It is suggested that Kayla patiently waits for Steve to wake up after the surgery. He finally does wake up, but there’s an unexpected consequence. It is hinted that he might not remember his past, or at least part of it. That includes his history with Kayla.

“Whatever the outcome is, it’s better than letting him stay as Stefano.”

New Days of Our Lives Spoilers: Steve Wakes Up After Surgery Complications, But There’s a Catchhttps://t.co/vzcqtfkXOc

However, fans shouldn’t worry too much. At some point, he remembers Adrienne Kiriakis (formerly Judi Evans) because of Steve sobs at her gravesite. It is also teased that in the next two weeks, Dr. Marlena Evans (Deidre Hall) will help Steve and one day, he finally remembers his love with Kayla.

What do you think of the “Steve-ano” storyline? Will you be happy when the brain chip is finally out of his head? Do you believe “Stayla” will get back together or is Kayla’s future with Justin Kiriakis (Wally Kurth)?