EastEnders Spoilers: Phil Turns Himself In – Guilt Pushes Him To Take Responsibility 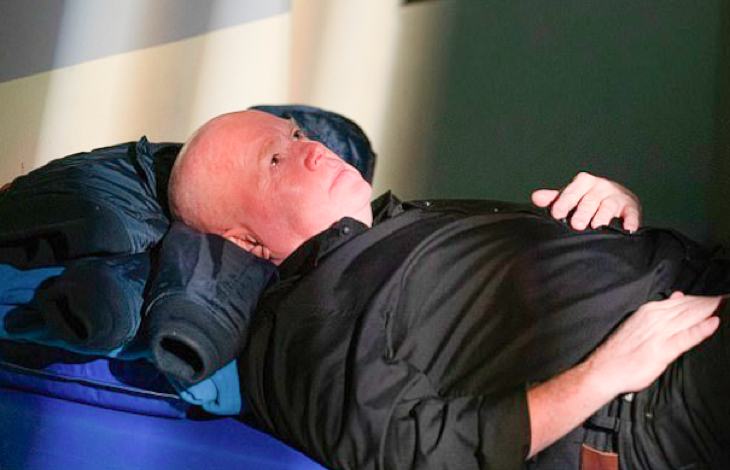 EastEnders spoilers hint that Phil Mitchell (Steve McFadeen) will let guilt overtake him as he mourns the death of his son, Denny Rickman (Bleu Landau). Phil is back in town for the funeral of Denny, but after a conversation with Sharon Mitchell (Leticia Dean), he becomes overwhelmed with guilt. He decided that he will turn himself in for causing the boat crash that took Denny’s life.

EastEnders Spoilers – Phil Is Back

In a recent episode of EastEnders, Sharon mourned her son’s death while having the funeral for him. She decided that she did not want any Mitchells to show up, but that did not stop them from coming to the funeral anyway. Sharon did not throw a fit when she saw Ben Mitchell (Matthew Silver), but she did get distraught when she found out that Phil was back in town. When Phil showed up, Sharon attacked him. This did not stop him from showing up again at her home. After a talk, she broke down and kicked him out as she still blamed him for Denny’s death.

EastEnders spoilers- Phil Turns Himself In

Phil decided to take one of Denny’s pictures with him, which prompted Sharon to go looking for him. However, when she found him, she was not looking for a fight, but instead, they went down memory lane as they remembered Denny. They talked about how things were before Denny’s death, and they both took the blame for what might have led to the death of their son.

EastEnders Spoilers: Biggest Stories To Watch Out For Next Week https://t.co/4eeKTV0hPf #EastEnders

After their talk, Phil has a conversation with Ian Albert Beale (Adam Woodyatt) and decided that he needed to take responsibility for his actions that lead to him causing the boat crash. After his talk with Ian, he walked over to the police station, although the scene cuts there, he will go on to turn himself in. When Ben finds out about his father turning himself in, he will be shocked. However, someone else will have other plans different from what Phil had in mind.

Viewers can look forward to Phil’s efforts to do the right thing but instead will be stopped by a mysterious person. What do you think? Who will be the person to stop Phil from confessing and turning himself in? Watch EastEnders from Monday and Friday at 8 pm and Tuesday and Thursday at 7.30 pm on BBC One to find out what happens next.