The Young and the Restless Spoilers: Nikki Plots To Break Up Nick and Phyllis – But Will She Be Successful? 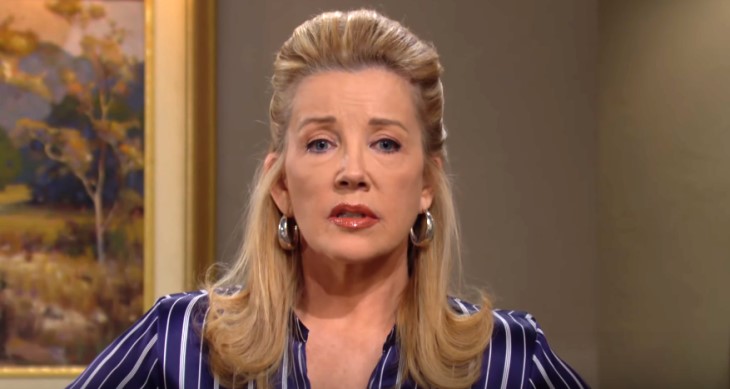 The Young and the Restless spoilers indicate that Nikki Newman (Melody Thomas Scott) will hatch a plot to put an end to Nick Newman (Joshua Morrow) and Phyllis Summers’ (Michelle Stafford) relationship.

After weeks of temptation, Nick and Phyllis finally gave in to the passion and reunited. The two have decided to give their relationship another shot, however, not many people are supportive of the reunion.

One person who is upset that Nick and Phyllis are back together is Nick’s mother Nikki.

She’s always been protective of her children, especially Nick. Whenever he has a woman in his life, Nikki judges the lady to make sure she’s a great fit for her son.

The Young and the Restless Spoilers – Nick Newman’s Exes

Nick has had plenty of exes in the past, and Nikki has had issues with them. At the moment, Phyllis is number one on the list of people Nikki doesn’t like.

When she learned that Nick was back with Phyllis, she immediately let her opinion be heard. Nikki tried to convince her son that it was a bad idea reuniting with Phyllis, but a stubborn Nick refused to listen to her advice.

Nikki has seen how much pain Phyllis has caused others over the years. The Newman family has suffered because of Phyllis’ misdeeds.

Nikki knows that Phyllis only cares about herself and nobody else. She’s seen firsthand how selfish Phyllis can be. During the JT Hellstrom (Thad Luckinbill) “murder,” Phyllis convinced the women that the right thing to do was to cover up his death. Then when the truth was finally revealed, Phyllis turned her back on the rest of the group in order to save herself from prison.

Nikki has never forgiven Phyllis for that, and odds are she never will. She’d love nothing more than to be rid of Phyllis, but it’s complicated. Phyllis is Summer Newman’s (Hunter King) mother, and she’ll always be a part of Nick’s life.

Phyllis and Nick have always tried to remain friends for Summer’s sake, but now the romantic feelings are reigniting.

The Young and the Restless Spoilers: Phyllis Targets Abby – Determined To Sabotage Her Career https://t.co/R6vOgSe2xo pic.twitter.com/5CFG5kdjox

However, Nikki wants to put an end to that before the couple becomes even more serious.

Nikki has tried not to meddle in her children’s lives, but when she sees them upset or she feels they’re making a mistake, then she’ll step in.

In Nikki’s mind, Nick is making a huge mistake by getting back together with Phyllis. If a talk isn’t going to knock sense into him, then Nikki will have to resort to a new plan to ensure the couple breaks up.

There’s no telling what Nikki has in mind, but she’ll do anything to prevent Phyllis and Nick’s reunion from going any further.