Days Of Our Lives Spoilers: Kayla Makes A Bold Decision To Get Steve Back – Does The Operation Herself! 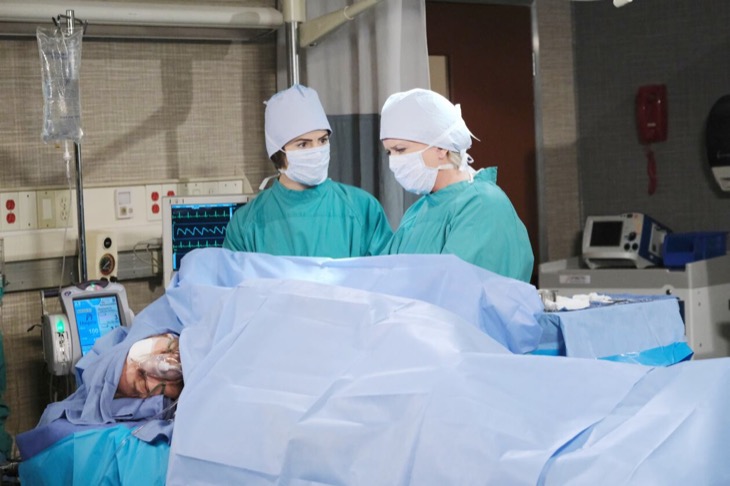 Days of Our Lives spoilers tease that Dr. Kayla Brady (Mary Beth Evans) makes a bold decision to get Steve Johnson (Stephen Nichols) back in an upcoming episode of Days of Our Lives; she’ll do the operation herself!

John Black (Drake Hogestyn) was able to convince – actually, trick – Dr. Wilhelm Rolf (William Utay) into operating on his wife, Marlena Evans (Deidre Hall) with supervision, to take out the chip he put in her brain, and previously, under Kayla’s supervision and armed guard, he removed the chip from Hope Brady’s (Kristian Alfonso) brain that had turned her into Princess Gina – but only after clearing it with Stefano. But Rolf downright refuses to “kill Stefano’s essence” by operating on Steve!

Chances are if he could slip the microchip with “the essence” programmed into it into a pocket without being observed, “Stefano” would still live in the chip, awaiting a new body. After all, at the point when Hope has turned into Princess Gina again, the real Princess Gina Von Amberg (Kristian Alfonso) had been dead for years. However, since Rolf, the most qualified person to remove the chip from Steve refuses to, Kayla makes a bold decision to do the surgery herself, although she will ask Sarah Horton (Linsey Godfrey) to assist.

Kayla still feels unqualified to do the surgery, even though she has watched Rolf do it twice and also tricked him into explaining how it was done while held captive, but she knows if Steve is ever going to get his own life back that it has to be done, and she is the only one who even has a clue to how to perform the procedure! She knows that Steve in his right mind would find being controlled like one of Stefano’s puppets, with Stefano pulling all the strings, would be intolerable for him, and a fate worse than death!

Kayla tells “Steveano” that she is determined to remove the microchip that contains Stefano’s essence from his brain – even if it kills him! She, of course, is referring to Stefano being killed, not Steve. Stefano will protest and likely bring up the scenario if she kills him she may kill Steve’s body and brain as well, but she is undeterred.

Days Of Our Lives Spoilers: Kayla Determined To Fix Steve – Even If It Kills Him

She is honest and tells him there is a risk of death to both his “essence” and to Steve’s physical body, but she goes back to how Steve would feel about the situation, and even if the choice was between physical life for his body but death for his mind, he’d choose death to both body and mind over control by Stefano!

Stefano does make one last request to see his children – and as Chad DiMera, (Billy Flynn) Kristen DiMera, (Stacy Haiduk) and Tony DiMera (Thaao Penghlis) file into his hospital room, they are all shocked when they find that the only thing Stefano wants is to tell them his one last goodbye. “Steveano” then is wheeled into the operating room, and Kayla and Sarah prepare for surgery.