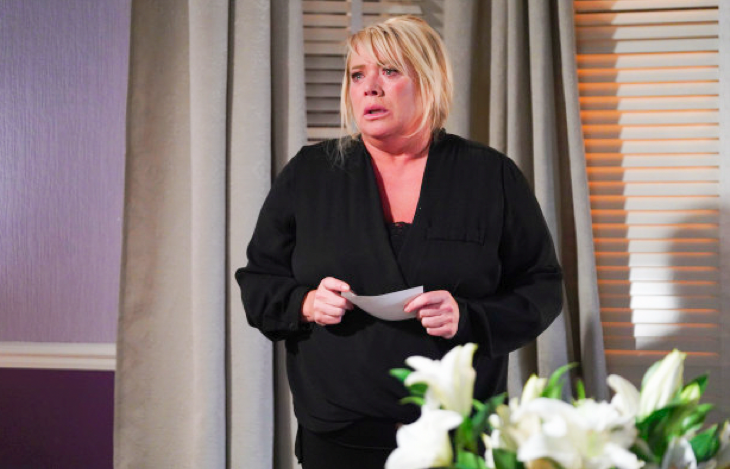 EastEnders spoilers hint that Ian Beale’s (Adam Woodyatt) secret about the death of Sharon Mitchell’s (Letitia Dean) son, Denny Mitchell (Bleu Landau), may lead Sharon to have another meltdown. Ian has been keeping a secret from Sharon, and he will do almost anything to stop her from finding out. However, with Dotty Cotton (Milly Zero) knowing about his involvement in Denny’s death, Ian’s secret may be revealed very soon. How might Sharon react to this information?

Ian’s secret may be coming out soon as Dotty becomes more determined to expose his secrets. Dotty was on the boat when Ian locked Denny in a room on the ship. Being suspicious about Denny’s death, she confronted Ian about it and was soon threatened by him to stay silent. Not long later, evidence dropped into her lap in the form of a voice message that was left by Denny, where they could hear him being locked into the room on the ship. In a recent episode, Ian got a hold of her evidence in order to get rid of it. He will be please that he has the upper hand. However, he will be wrong as Dotty will have other plans and will warn him about this. With how things are going, it seems that Dotty will be the one to expose Ian. How will Sharon react to this news being revealed?

Right now, it seems that Sharon is still in a bad place with no end being in sight. This could be because she is going through the grieving process but could also have something to do with Ian’s guilt causing him to enable her as well.

Ian would rather cover up the problems that Sharon is going through instead of helping her work through it. So, when the truth comes out, she will be upset with Ian and may blame him for Denny’s death. However, the way she may also have a meltdown when she finds out that the person that she has depended on this whole time played a part in the death of her son.

Ian will probably not be the one to reveal what really happened, but the truth will come out eventually. Depending on how Sharon is at the moment will determine how she will react to the news. As the more dependent, she is on him, the more of a meltdown she might have. What do you think? Will Ian come clean, or will Dotty be the one to spill the beans? How will Sharon react to the news being revealed? Watch EastEnders from Monday and Friday at 8 pm and Tuesday and Thursday at 7.30 pm on BBC One to find out what happens next.