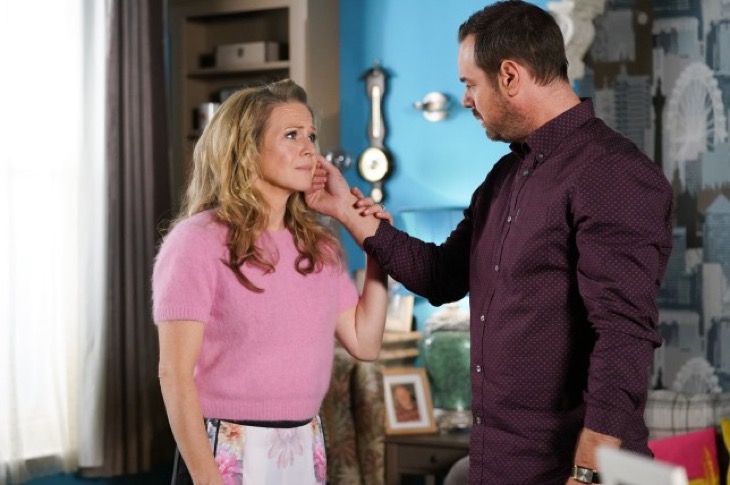 When the Carters receive a large sum of money as insurance compensation for the boat crash, they may be a plan to leave Walford for good.

Following their severe marriage problems, due to Linda Carter’s (Kellie Bright) drinking problem, she and Mick Carter (Danny Dyer) are moving out of Queen Vic. They are planning to make a new life together by removing Linda from the temptation of alcohol.

According to EastEnders spoilers, they will now receive a large sum of money in compensation for the boat crash. With this under their belts, will the couple decide to leave Walford for good?

Huge Compensation Could Lead To The Carters Leaving

Mick and Linda Carter have had a rough time in their marriage. Not only have they been running a pub, but they also live above Queen Vic. This has put an unbearable strain on Linda, as she tries to resist the temptation of alcohol.

Linda has been struggling with her alcoholism for the last year, right up to the boat crash on the EastEnders anniversary special. After what happened on that boat crash, Linda has now promised Mick it is time for her to change.

At one stage, Linda served Mick divorce papers, which was devastating to him. At first, he refused to sign the papers and rather made the vow to work on their marriage. However, when Linda once again got drunk, he caved in.

However, Linda changed her mind on the morning of the boat party. She realized how much she loved Mick, but things went wrong when she spotted him with Whitney Dean (Shona McGarty). Linda immediately downed several bottles of alcohol, before accusing Mick of having an affair in front of everyone on the boat.

This led to Mick storming off, while Linda went searching for alcohol on the boat, an act that almost led to the loss of her life. While she was searching, Mick had a chat with Stuart Highway (Ricky Champ) and came to the realization Linda needed his help. He went searching for the boat for his wife.

The next scene showed Keanu Taylor (Danny Walters) fighting with Phil Mitchell (Steve McFadden) in the control room of the boat. While this was going on, Linda climbed over some kitchen equipment to get her hands on a bottle of wine. At that moment, the boat crashed, causing Linda to fall and trap her foot between two heavy appliances. She was stuck and couldn’t escape, as the water started pouring into the room.

Fortunately, at that moment, Mick arrived on the scene and managed to get Linda free. However, during this, they both had a heart-to-heart chat about the future of their marriage.

As Mick had to break her ankle to be able to set her free, Linda spent a while on crutches. But at this stage, she managed to slowly turn her life around. She even managed to apologize to everyone she had hurt over the last few months.

EastEnders Spoilers: Could Phil And Sharon Get Back Together – Relationship In The Works https://t.co/oS1mQMVzBA #EastEnders

While Linda has been doing well in keeping away from the demon alcohol, she did slip up at Dennis Rickman’s (Bleu Landau) funeral, by taking a sip of Shirley’s (Linda Henry) vodka. While this was only a small lapse in her judgment, Mick and Linda have now decided the only way go is to sell Queen Vic and move on.

While nothing has been said about the family leaving Walford, a huge payment relating to the boat’s insurance could make them decide to go. Not only that, but there could be an insurance claim against the captain of the boat if it is proved he failed to protect the passengers.

With a huge amount of money on hand, Mick and Linda might choose to spend their new life far from Walford. Now fans will be wondering whether they will, indeed, leave or will they choose to stay, due to their emotional connection with Walford?

Watch EastEnders on Monday at 8 pm on BBC One to find out what happens next.