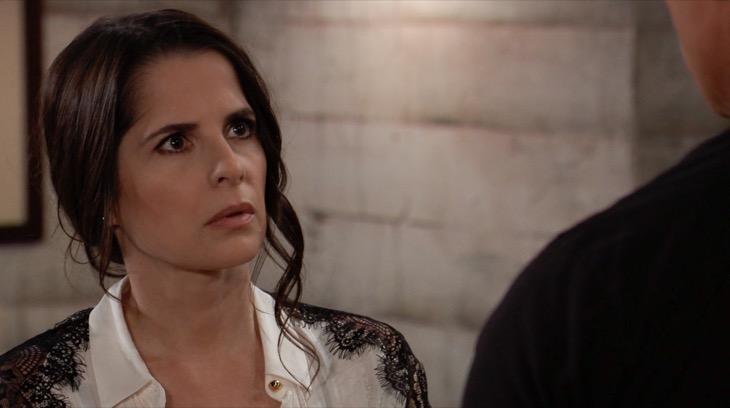 General Hospital (GH) spoilers recap for Monday, April 6, reveal that Sam McCall (Kelly Monaco) and Jason Morgan (Steve Burton) met at a safe house at Sam’s request. Jason said that they shouldn’t be meeting, and after receiving a call, he relayed to Sam that Cyrus Renault (Jeff Kober) was being released tonight. Jason said that he and Sam couldn’t see each other anymore – it was too risky now.

Sam balked, but Jason reminded her about the need to keep their kids safe, and eventually, Sam accepted their split, but only until Jason could deal with Cyrus. Sam and Jason had a tearful goodbye, and after Jason was gone, Sam had an epic meltdown, angrily throwing things around the room in frustration.

Meanwhile, at GH, Ava Jerome (Maura West) and Nikolas Cassadine (Marcus Coloma) arrived and approached Laura Collins (Genie Francis) and Kevin Collins (Jon Lindstrom). Ava suggested the four of them get dinner or drinks, but Laura had other plans. Robert Scorpio (Tristan Rogers) arrived to break the news to Laura about Cyrus’ release tonight, which upset both Laura and Nikolas, who felt protective of his mother.

Ava and Nikolas walked off and Nikolas worried about his mother getting too involved with Cyrus. Ava joked that Nikolas almost seemed human. And Robert broke it to Laura and Kevin that Cyrus was going to walk free with no parole or strings attached to his release. Laura hoped that Cyrus would go back to Seattle.

Later, Nikolas spoke with Kevin privately and asked him to get Laura to back off of Cyrus for her own safety. Kevin refused, saying that he and Laura have mutual respect for each other – something that Nikolas might want to try sometime.

Over at Jordan Ashford (Briana Nicole Henry) and Curtis Ashford’s (Donnell Turner) place, Trina Robinson (Sydney Mikayla) barged in looking for Jordan. Curtis explained that Jordan wasn’t there, and Trina said that she wanted Jordan to take back the lies about Marcus Taggert (Real Andrews). Curtis did his best to explain that they weren’t lies, and that Taggert did what he did for good reasons. Trina wasn’t having it.

Carly asked what Sonny was going to do now, and he said that he and Jason were going over options. Carly hoped that Cyrus would go back to the west coast, but Sonny explained that doing so would make Cyrus look weak. Sonny vowed to keep his family safe.

Over at the Metro Court, Nina Reeves (Cynthia Watros) dined with Jasper “Jax” Jacks (Ingo Rademacher), and they remarked about Charlotte Cassadine’s (Scarlett Fernandez) big smirk when Jax fell at Kelly’s earlier. Ava then approached their table, and Jax needled her about her sham marriage to Nikolas. Ava needled Jax right back about all his failed marriages.

Nina and Jax tried to get back to their evening, but then Carly interrupted them wanting to talk about Josslyn Jacks (Eden McCoy). Nina stepped away and joined Ava at the bar, who noted that any woman in Jax’s life will always come second to Carly. Meanwhile, Carly filled in Jax about Cyrus’ release, saying that she understood if Jax wanted to take Josslyn and leave Port Charles. Jax refused for now.

Next, in the Corinthos kitchen, Cameron Webber (William Lipton) talked with Josslyn about what’s been going on with Trina and the allegations that Taggert framed Cyrus. Josslyn was about to go find Trina when Trina arrived, wanting information on how to sue Jordan for slander. Josslyn got Trina calmed down, and then Trina finally broke down, saying she missed her dad. Josslyn, Cameron, and Trina hugged.

At Pentonville, Jordan met with the warden briefly before Cyrus walked in. The warden explained that Cyrus would be free as of tonight, and when the warden stepped out, Cyrus smiled at Jordan, telling her “good job.” Jordan insisted that she wanted her son, but Cyrus said that he wasn’t out yet. Jordan said that if TJ wasn’t released unharmed, then Cyrus would be too dead to enjoy his freedom.

Later, Robert and Laura arrived to see the warden, and Cyrus came walking in wearing a suit. Cyrus smiled at Laura, asking if she was there to escort him back to Port Charles. Laura suggested that Cyrus return to Seattle, and Cyrus asked what Laura would do if he decided to stay. Laura quipped that when he was killed, she’d do her best to find who’s responsible and bring them to justice.

Cyrus then signed some paperwork and held out a hand to Robert for a handshake. Robert refused. Cyrus tried the same with Laura, and she refused also. Cyrus walked out of the office a free man, as Laura and Robert watched unhappily.

General Hospital Spoilers: Nikolas And Ava Continue To Keep Up Appearances – But How Long Will It Last?

Back at Curtis and Jordan’s place, Jordan returned with a bottle of wine and told Curtis that “it’s done – Cyrus will be released tonight.” Curtis suggested they wait until TJ was released to celebrate, but Jordan said they didn’t have the luxury of waiting. Jordan explained that this could be their last night together because if Cyrus doesn’t release TJ, she’ll kill Cyrus then turn herself in.

Curtis stressed that he wouldn’t let Jordan do this and that it wasn’t in her to kill. Jordan disagreed, saying that it would be justice. Jordan begged Curtis to just love her tonight, and the two made love.

Finally, Jason arrived at Sonny’s office, and Sonny explained that Cyrus wasn’t going back to Seattle. Jason advocated for immediately eliminating Cyrus, and Sonny told him that if he could get a clean shot, then take Cyrus out tonight. Jason readied a weapon and left, with Sonny giving him the nod as he exited.

There’s definitely a lot going on right now on General Hospital, so stay tuned! We’ll be sure to give you updates as more GH news comes in. Stick with the ABC soap and remember that CDL is your go-to place for all the latest General Hospital recaps and spoilers.