The Bold and the Beautiful Spoilers: Monday, April 6 Recap – Sally Will Fight For Life Only If Wyatt’s Her Man – Flo Grills Dr. Escobar 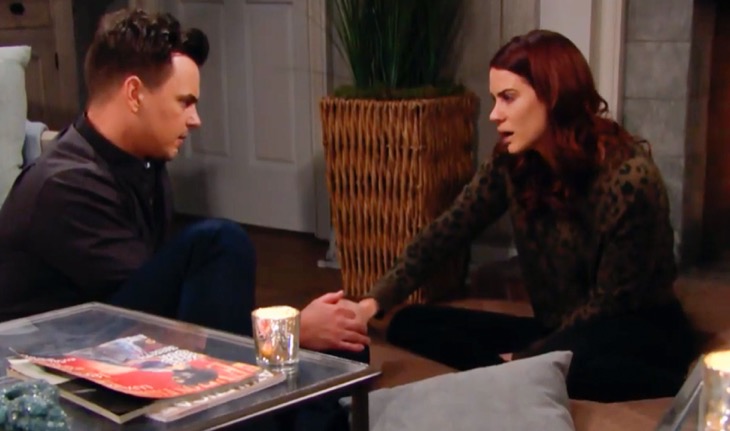 The Bold and the Beautiful spoilers recap for Monday, April 6, reveal that Steffy Forrester (Jacqueline MacInnes Wood) and Zoe Buckingham (Kiara Barnes) chatted in the Forrester CEO office. They discussed the fall collections briefly, then Steffy mentioned how Ridge Forrester (Thorsten Kaye) had made some adjustments to Sally Spectra’s (Courtney Hope) designs for use in the couture line.

Zoe revealed that she knew about Sally’s illness, and she openly wondered whether it was really necessary for Sally to be living with Wyatt Spencer (Darin Brooks). Steffy bristled and noted that Sally was dying, but Zoe pointed out that Sally’s family seems to be absent in all of this. Zoe admitted that she could be over-reacting, but she knows how much Sally adores Wyatt.

Steffy wondered if Zoe thought that Sally was going to jeopardize Wyatt’s relationship with Flo Fulton (Katrina Bowden), and Steffy pointed out that Flo and Wyatt were just thinking about Sally rather than themselves. Ultimately, both Zoe and Steffy agreed that it was good that there were no more secrets between Wyatt, Flo, and Sally.

Meanwhile, over at Flo’s apartment, she and Wyatt lamented about Sally’s plight, and about how she hasn’t aggressively looked into treatment options. Flo thought that there must be something that Sally can do to buy herself some more time and that it just wasn’t like Sally not fight. Flo said that she was going to visit with Dr. Penny Escobar (Monica Ruiz), and she told Wyatt that they’d all get through this.

At the beach house, Sally and Dr. Escobar argued. Sally told Dr. Escobar to keep doing what she’s doing because she’ll benefit from this plan, too. Sally reiterated her promise to get Dr. Escobar into fashion designing at Forrester Creations, and she asked Dr. Escobar to leave because she had something special planned for Wyatt later. “We will have the future that Flo stole from us,” Sally said confidently.

Later, Dr. Escobar was in her office sketching when Flo entered her office. Flo introduced herself, saying that she was a friend of Sally’s. Dr. Escobar looked worried as Flo explained that she just wanted to see if there was something that could be done for Sally – perhaps a clinical trial. Flo noted that some things about Sally’s condition just don’t add up, and Dr. Escobar got more nervous.

Dr. Escobar explained that she couldn’t offer up any specific information about Sally and that Sally was tough and stubborn. Dr. Escobar said that she couldn’t force a patient to make the right decision. Flo then asked exactly what disease or condition Sally had, and Dr. Escobar refused to answer. When Dr. Escobar stated again that there was nothing she could do, Flo asked if that was really true…or was there something that she should know?

Back at the beach house, Sally prepared for Wyatt’s return by applying more makeup to make herself look pale. Sally was hobbling with the walker when Wyatt showed up. Sally had a romantic setup going, complete with wine, candles, and a fire. Wyatt thought that Sally should be resting, but Sally said that since she didn’t know how many nights they had left together, she wanted to have a little fun.

Bold and the Beautiful Spoilers: Ridge and Shauna Get Closer as Brooke’s Calls Are Ignored

At this point, Sally said she might if she had something to fight for…like him. Sally went on, saying that she didn’t mean to put this on Wyatt, but that she would fight until the end for a future with him. Sally told Wyatt that she loved him and that she thought they would have more time. Sally asked Wyatt to remember what drew them together, and they flashed back to some of their happier times together.

That was a terrific episode of B&B, and there’s more coming this week, so stay tuned! We’ll give you updates as more B&B news comes in. Stick with the CBS soap and with Hollywood Hiccups for all your Bold and the Beautiful spoilers and recaps.