EastEnders Spoilers: Mick And Linda’s Secrets Revealed – Linda Guilt Gets To Her 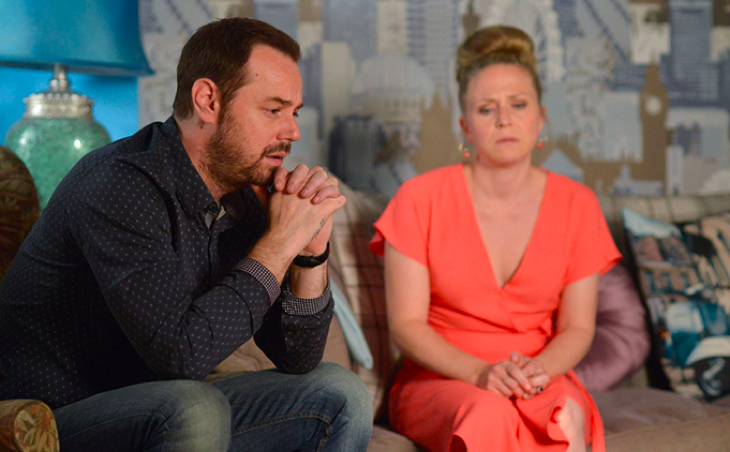 EastEnders Spoilers hint that Mick Carter (Danny Dyer) and Linda Carter’s (Kellie Bright) secret will be revealed as Linda deals with the guilt for having a relapse. Mick and Linda have decided that they will sell Queen Vic in order to stop Linda from having setbacks. However, after deciding to sell Queen Vic, they try to keep it a secret for the time being, but secrets have a way of coming out. It seems this one will come out quicker than expected.

When Mick learns about Linda’s relapse after Denny Rickman’s (Bleu Landau) funeral, he makes the decision that they should sell Queen Vic in order to make sure that Linda is not surrounded by liquor and tempted into drinking any. As of now, Linda is always surrounded by alcohol as she works around and lives around it on a daily basis. This makes her chances of having a relapse more likely. After hearing Linda’s story about how she grew up in a pub and has been near a pub her whole life, he decided that it was time for them to move away from Queen Vic.

Mick has already had someone out there to value Queen Vic, but a guilt-filled Linda tries to get things back to normal without Mick having to give up Queen Vic. She suggests that she could just not work behind the bar anymore. They both decide that selling it would be for the best but that they should keep their decision under wraps for the time being.

This will mean keeping it from Shirley Carter (Linda Henry) and Tina Carter (Luisa Bradshaw-White), but news will travel fast in Walford. They are soon called out for keeping their secret from everyone. How will they react to the truth being revealed?