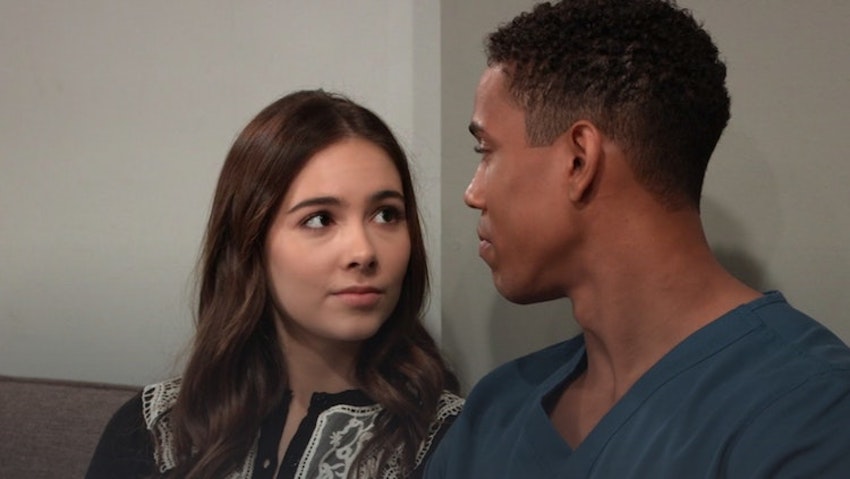 General Hospital spoilers tease that TJ Ashford (Tajh Bellow) will finally be released and comes home to Molly Lansing-Davis (Haley Pullos) with a compromise to marriage in an upcoming episode of General Hospital; a domestic partnership!

General Hospital viewers will recall that TJ had gone missing after Molly turned down his marriage proposal in Metro Court several weeks ago; he had said he was going for a walk to clear his head. The only reason she turned him down is because she doesn’t believe in the institution of marriage, although he does obviously, and he had set up a fancy and likely expensive proposal dinner and had an expensive looking engagement ring for her as well, which she couldn’t accept, based on her principles, which do not allow for anything extravagant or holding to expensive traditions or legal contracts, such as a big fancy wedding, a reception, expensive wedding dresses and bridesmaids and their dresses, and tuxedos for the groom and the groomsmen would entail.

For Molly, a traditional wedding is not about a young girl’s wishes to become queen to her Prince Charming, it’s about commercialism and greed! TJ never returned home where they had lived together for several years, and he never showed up for his work at General Hospital either, and she had gone to Jordan for help, Jordan at first dismissed it, saying TJ needed space, and then outright blamed Molly for driving him away in last Thursday’s episode! Of course, Jordan couldn’t risk Molly or TJ getting killed, knowing that TJ had been kidnapped by Cyrus’ goons at the orders of Cyrus but didn’t bring Molly into the loop about her kidnapping. When he is released, he will be unceremoniously dumped in front of General Hospital unconscious, with a concussion, and lots of bruises and scars from his ordeal.

TJ Ashford Wakes Up In General Hospital to His Mother, Stepfather, And Molly Lansing-Davis

TJ is quickly rushed into General Hospital’s emergency room and attended to; and Jordan is notified of his status. By the time he wakes up, Jordan, Curtis Ashford (Donnell Turner) and Molly are with him, although depending on how many are allowed in to visit a patient at a time, he may spot Molly looking through the window of the room waiting her turn. Jordan will be holding his hand and talking to him and Curtis’s voice will be heard by TJ as well, but he is overjoyed when he spots Molly!

While in captivity, TJ had thought a lot about their last conversation and their very different stances on marriage. He came up with the idea of a domestic partnership – which would require some compromise from Molly, considering it is a legal partnership but because it is a legal partnership allows for the domestic partner to be covered on the other’s insurance benefits, for instance. Partners who want to register for a domestic partnership must declare that their relationship constitutes a serious relationship at a courthouse or other designated government office. Some of the common benefits of domestic partnership include: ability to get coverage on a family health or life insurance policy; right to family leave for a sick partner; right to bereavement leave; and visitation rights in hospitals and jails. As soon as he is up to it, he approaches Molly with his idea, and even though she is still more conflicted than she lets on, she agrees and tells him it’s a perfect solution for them.