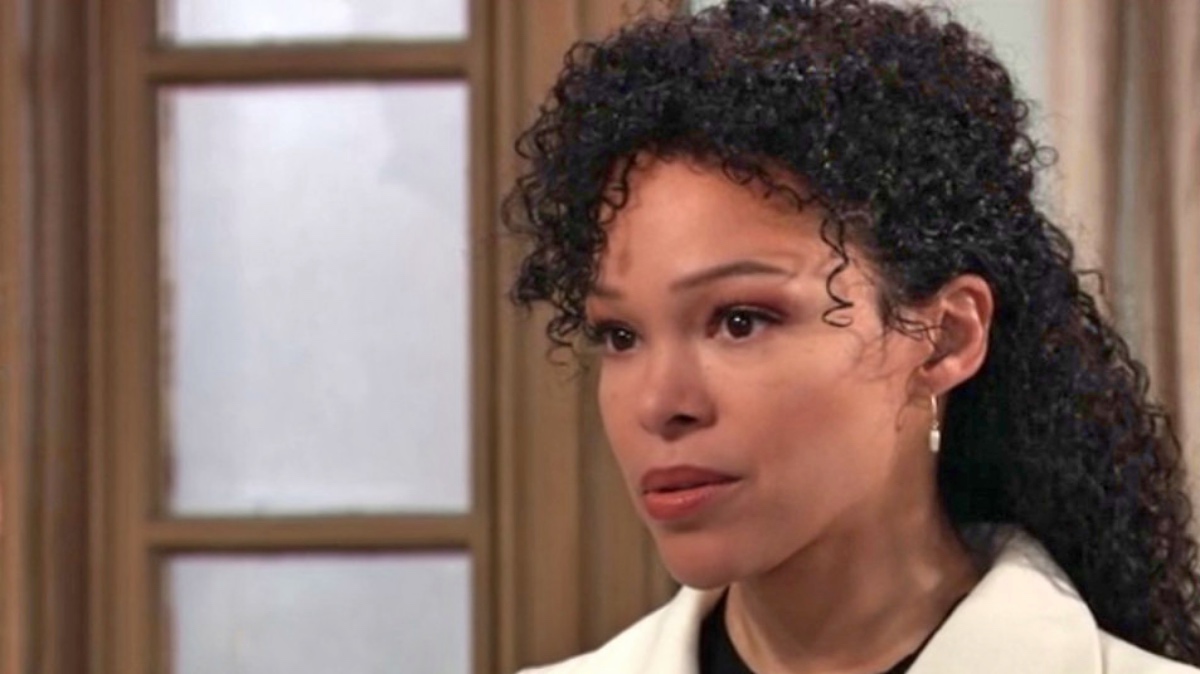 Some Gh fans think it’s just a little bit strange that Portia keeps having these little “moments” with Curtis. Although Curtis is a married man, and Portia isn’t overtly chasing him, there are an awful lot of viewers who think Portia wants Curtis back in her life. There seem to be a lot of desire filled glances these two GH characters throw toward one another. While Curtis is apparently too honorable to act on those impulses, Portia on the other hand, may have no qualms at all.

GH viewers know that not long ago, Portia found an opportunity to reopen a conversation with Curtis about their old relationship. Using the pretext of Curtis’s own marriage to Jordan Ashford (Briana Nicole Henry) and Curtis’s relationship with TJ (Tajh Bellows), Portia seemed to do an awful lot of probing. Some are now wondering if Portia isn’t trying to discover if there’s a way to get her foot into Curtis’s emotional door.

Portia’s a changed woman! At least, that may be the story Portia tries to sell Curtis in the near future. While she can never argue that she’s never cheated, Portia definitely can tell Curtis that she never cheated on her ex-husband, Marcus Taggert (Réal Andrews) with anyone other than Curtis! In all the intervening years between Portia and Curtis’s affair, Portia could say that she’s never allowed herself to look for love with a married man either. (Never mind that with all her glances and batting eyes and finding small ways to put herself in Curtis’s path, she seems incredibly intent on worming her way into the heart and mind of a married man right now!)

With that said, whether Portia is or is not intent on getting Curtis back into her life, the probability of that happening is actually higher than some might think. While Curtis obviously doesn’t respect Portia’s choice in cheating on Taggert with him, as far as he knows, Portia didn’t continue on a campaign of deception with him. That’s something Curtis can respect. Moreover, considering the fact that Jordan has done nothing but lie to him for months now, Curtis may feel like being in Portia’s presence is a breath of fresh air!

GH fans know that Curtis has been remarkably patient and supportive of Jordan. Even when he’s discovered her duplicity, Curtis has apparently forgiven Jordan and has gone along pretty much to get along. That could change, however, if Jordan continues headstrong in her belief that subterfuge is her only recourse. Once daylight is cast upon Jordan’s deceit and it comes time to pay the piper, Curtis may find that he doesn’t want to go down with that ship.

Should that happen, Curtis may find that his respect for Jordan has disappeared. In fact, for many men in Curtis’s shoes, any loss of respect would already be too far gone to recover. It’s quite possible that Curtis and Jordan’s relationship is already doomed. Curtis and Jordan simply don’t know it yet.

GH fans know that if that’s the case, Curtis is going to remember all those little “innocent” moments with Portia. For her part, it’s a fair bet Portia’s going to be sitting back with a little smirk on her face. There is no question Portia has a better image than Jordan does right now.

With all of the above in mind, viewers just might agree that it may not be long before Curtis finds himself walking through Portia’s door.