The Bold and the Beautiful Spoilers: Wednesday, April 8 Recap Ridge Moves In With Shauna – Quinn Won’t Apologize For Video Exposure 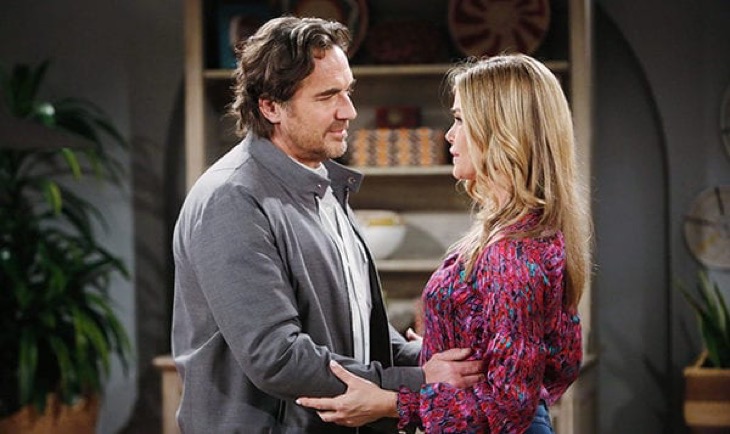 The Bold and the Beautiful spoilers recap for Wednesday, April 8, reveal that Quinn Forrester (Rena Sofer) was on her phone at the Forrester mansion texting Shauna Fulton (Denise Richards) when Eric Forrester (John McCook) came downstairs. Eric was curt with Quinn, and Quinn noted that Eric must still be upset with her. Quinn said that she had done Ridge Forrester (Thorsten Kaye) and Katie Logan (Heather Tom) a favor by exposing the video.

Eric wasn’t buying it, and he protested that Brooke Forrester (Katherine Kelly Lang) and Ridge were married. “Not for long,” Quinn quipped. Eric then accused Quinn of texting Shauna when he walked in, and he openly wondered if Ridge was with Shauna. Quinn said that she certainly hoped so. Eric blasted Quinn, saying that she intentionally tried to sabotage a marriage.

Quinn fired back that it was a “sham” of a marriage. Eric said that he didn’t excuse Brooke for what she did, but that he didn’t excuse Quinn either. Quinn said that she wouldn’t apologize and that she was sick and tired of Brooke getting away with her bad behavior. Eric wondered why Brooke would be with Bill Spencer (Don Diamont) anyway, and Quinn said that Brooke couldn’t help herself where Bill was concerned.

Quinn went on, saying that Ridge would be a fool to ever take Brooke back and that if the video hadn’t surfaced, then who knows what Bill and Brooke would have done. Quinn defiantly said that she hoped Ridge was with Shauna right now, and that he can have an awesome, drama-free future with her. “Lord knows, he deserves that,” Quinn said.

Meanwhile, in the Forrester CEO office, Brooke talked with Donna Logan (Jennifer Gareis) after trying again to reach Ridge by phone. Donna reminded Brooke that Ridge was probably still in shock overseeing the video. Brooke blamed Quinn for her problems, and Donna wondered if Brooke even thought about Katie before kissing Bill. Brooke said that she knew the kiss was reckless and stupid, and that she felt horrible.

Brooke worried about Ridge possibly being with Shauna, and Donna said that what really mattered here was getting Ridge and Katie to forgive her. Donna offered to go to Katie and talk with her on Brooke’s behalf. Brooke thanked Donna for her support and understanding. Donna said that Brooke and Ridge would overcome this obstacle.

Later, Brooke was alone and trying again to text Ridge when Quinn showed up and told Brooke that she was wasting her time. Quinn needled Brooke about the kiss with Bill and about how maybe she’s wanted Bill all along. Brooke declared that she wasn’t going to give up on Ridge or Katie and that Shauna would never be with Ridge. Quinn fired back that Shauna won’t throw away her chance with Ridge.

The Bold and The Beautiful Spoilers: Sally Agrees To Treatment, But She Demands Something From Wyatt https://t.co/XomYudHtQf pic.twitter.com/hAR4BOLULu

At Shauna’s apartment in Las Vegas, Ridge said that he and Shauna should make a pact – that they’ll completely cut themselves off from the world for a while. Shauna agreed, and Ridge got busy looking through an old photo album of hers. As Shauna and Ridge talked, Shauna remarked that Ridge made her feel special and that she particularly liked the flight on the private jet.

Ridge enjoyed being in Shauna’s home, and he wanted to get to know her better and see Las Vegas from her point of view. They talked briefly about the video, then Ridge’s phone pinged with a text from Brooke, but he ignored it. Shauna suggested that Ridge call Brooke, but he refused, saying that he wanted to learn more about her.

Ridge called Shauna’s apartment a little oasis, then he remarked that she was like an oasis for him. Shauna noted that Ridge seemed relaxed, and he again insisted that he wanted to peek behind the curtain to see this incredible woman in front of him. Shauna gushed about how lucky she was to know Ridge, and the two kissed sweetly and smiled at each other.

That was a great episode of B&B, and there’s more to come tomorrow, so stay tuned! We’ll be sure to give you updates as more B&B news comes in. Stick with the CBS soap and keep Hollywood Hiccups bookmarked for the latest Bold and the Beautiful recaps and spoilers.