General Hospital Spoilers: Molly And TJ’s Happiness Might Come At A Cost – Brando Refuses To Go Away 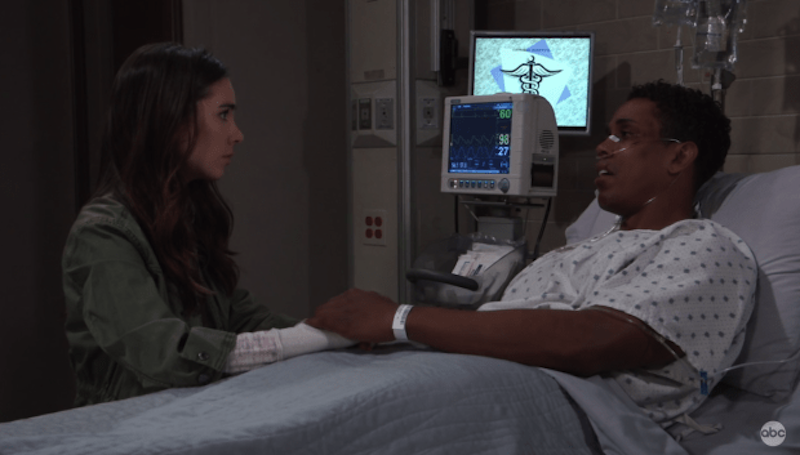 General Hospital (GH) spoilers tease that Molly Lansing (Haley Pullos) and TJ Ashford (Tajh Bellow) are getting a second chance, but will Molly’s impulsive hookup with Brando Corbin (Johnny Waycross) cause the reunited couple to end before they even have the chance to reconnect?

For eight years, Molly and TJ have been together. For the longest time, they seemed like the most stable, mature couple in Port Charles. While others get together and break up on a regular basis, Molly and TJ have stuck by each other through thick and thin. So no one could blame TJ, when he decided it was time to pop the question. But TJ didn’t take into account Molly’s views on marriage. Molly turned TJ down, not because she didn’t love him, but because she doesn’t believe in the institution of marriage.

The disappearance of TJ Ashford!

TJ was upset by Molly’s rejection and he stormed out. That was the last that Molly, or anyone else for that matter, heard from TJ for several days. Molly believed that TJ was mad at her and just blowing off steam after she turned down his proposal. But the truth was far more sinister. TJ had been kidnapped by Cyrus Renault’s (Jeff Kober) men in an effort to get TJ’s mother, Police Commissioner Jordan Ashford (Brianna Nicole Henry) under his control. In order to keep Molly from searching for TJ, Jordan told Molly that TJ left because of her. Jordan was brutal with Molly, who finally believed that she and TJ were over.

Molly was so distraught that she has an accident than tore up the undercarriage of her car. She wound up in Brando’s garage and the two hit if off. In fact, they had sex than very night. But Jordan managed to secure Cyrus’ release from prison, so he had TJ released. TJ was beaten so he ended up at General Hospital. He reunited with Molly and they decided to go forward with a domestic partnership. While not as formal as marriage, it still shows Molly and TJ’s commitment to one another.

A celebration of love

Look for Molly and TJ to gather friends and family as they celebrate their love and commitment to each other as domestic partners. But will Molly’s one night stand come back to haunt her just as she is reconnecting with TJ. Will she still feel that she is still drawn to Brando? And is Brando going to be able to just forget Molly or will he try to make her see that perhaps TJ isn’t the right man for her. There is also the possibility that Molly will turn up pregnant. If the child belongs to Brando, it could very well spell the end of TJ and Molly once and for all!

Will Molly and TJ have a huge celebration to celebrate their love? Or will lingering thoughts of Brando make Molly doubt her feelings? Could she be pregnant with Brando’s baby? Do Molly and TJ still have what it takes to be a viable couple? Anything can happen, so stay tuned to General Hospital airing weekdays on ABC. And don’t forget to check back here regularly for all your General Hospital news, information and spoilers!