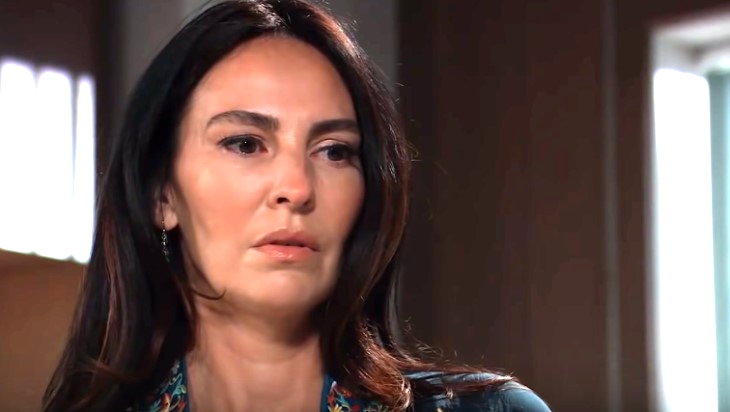 General Hospital (GH) spoilers tease that now that TJ Ashford (Tajh Bellow) has been released from Cyrus Renault’s (Jeff Kober) captivity, Cyrus may no longer have any use for Harmony (Inga Cadranel). As viewers know, Cyrus had Harmony acting as a go-between between him and Jordan Ashford (Brianna Nicole Henry) while he had TJ captive. Now that Jordan has had Cyrus released from prison, Harmony’s usefulness may be over. And that could very well mean the end of Harmony.

GH Spoilers: Will Cyrus let Harmony free from his control?

Many times in mob life, once someone’s usefulness is over, they disappear. Could Cyrus want to tie up any possible loose ends and kill Harmony. He wouldn’t want to have Harmony being able to testify against him. He just got out of prison, so he’s not going to want anything, or anyone, out there whose testimony could put him away again. Cyrus might go another route to ensure Harmony’s silence, if he decides to keep her alive.

Harmony has already indicated that Cyrus threatened Harmony’s daughter, Willow Tait (Katelyn McMullen), in order to keep Harmony under his thumb. He might reiterate the threat of harm coming to Willow if Harmony doesn’t keep her mouth shut. But Willow would not want her safety to keep Harmony from doing the right thing, so if she finds out, she might encourage Harmony to do the right thing. She might also be counting on her boyfriend Harrison Chase (Josh Swickard) or Michael Corinthos (Chad Duell) and his family to keep her safe.

Cyrus could be holding something completely different over Harmony. It’s been hinted that Harmony isn’t really Willow’s birth mom. Perhaps Cyrus knows that Willow is adopted, and is using that information to keep Harmony in check. If Harmony is desperate to keep this information quiet, she might just manage to escape with her life. But the truth is, as stated above, most of the time in the mob business, people are eliminated once they are no longer needed.

Will Cyrus have Harmony killed now that he has been released from prison? Or will he continue holding the threat of harm to Willow over Harmony’s head? Or are there other secrets between Harmony and Cyrus yet to be revealed. Anything can happen, so stay tuned to General Hospital airing weekdays on ABC. And don’t forget to check back here regularly for all your General Hospital news, information and spoilers!