Days Of Our Lives Spoilers: Marlena And John Intervene On Kristen’s Behalf 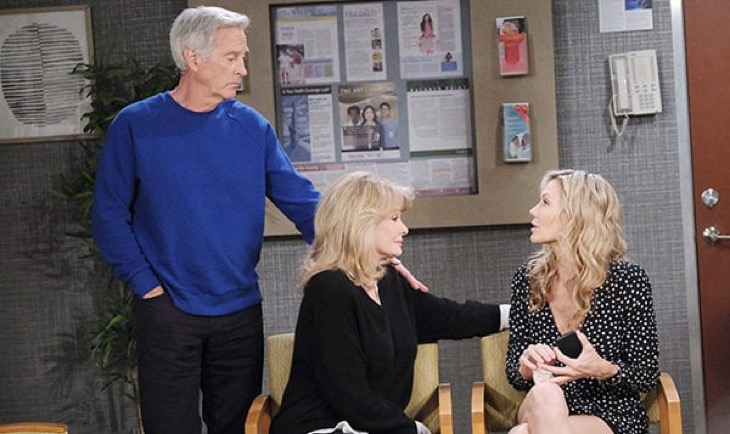 Days of Our Lives spoilers tease that Dr. Marlena Evans (Deidre Hall) and John Black (Drake Hogestyn) will intervene on Kristen DiMera’s (Stacy Haiduk) behalf in an upcoming episode of Days of Our Lives!

Kristen DiMera (Stacy Haiduk) was approved for a volunteer position holding babies in the nursery of Salem University Hospital but ran into a problem. She had been asked to hold her first baby, a little girl named Lily, and rock her in a rocking chair while her mother is recovering from complications from a c-section.

When volunteers rock babies in the hospital nursery, it usually isn’t just one baby for the whole time they volunteer, it is usually one baby at a time but several babies on and off– the hospital staff want the baby to be comforted, but not to bond to the volunteer in place of the mother and they don’t want the volunteer to bond to the baby inappropriately either. Kristen, unfortunately, has already bonded to Lily and doesn’t want to give her back to the nurse!

This is very understandable; Kristen still has nightmares of her baby “calling her” every night, and she cannot find her, and still has an unsettling feeling of being strongly drawn to Mackenzie “Mickey” Horton (Josephine and Rosalind May) in spite of herself. Of course, Days of Our Lives viewers know that Kristen will fully understand why in only a couple of days, but for right now, this little newborn named Lily has captured Kristen’s heart and subconsciously, she undoubtedly thinks this is Rachel and of course she doesn’t want to let her go – after all, look what happened the last time she let a nurse take Rachel away from her – as far as Kristen knows now, anyway!

John Black And Marlena Evans Are In Salem University Hospital

John and Marlena happen to be in the hospital – as Days of Our Lives viewers will recall, Marlena was in the hospital while Dr. Wilhelm Rolf, (William Utay) under supervision by Dr. Kayla Brady (Mary Beth Evans) and a police guard removed the microchip that was controlling Marlena’s emotions, memories, and behavior at least to some extent while Stefano DiMera (Stephen Nichols) in Steve Johnson’s (Stephen Nichols) body was trying to make Marlena his “queen of the night”.

Steve is also in the hospital, where Kayla and Dr. Sarah Horton (Linsey Godfrey) removed the chip from his brain, where Kayla had to make a risky decision to remove it even if it meant cutting through the frontal lobe of his brain, to keep it from self-destructing which would have meant certain death, not only for Steve, but possibly for Kayla, Sarah, and anyone else in the vicinity! Of course, it could have been a ploy on Rolf’s part to save his master, but there was no way of knowing that. Marlena was being released from the hospital but told John she wanted to wait to see how Steve was.

Days Of Our Lives Spoilers: Steve Bonds With Hope Over Brain-Chipping and Adrienne’s Death https://t.co/EqlBAX5qWo pic.twitter.com/mGuvitgc7e

They had gone in to find Steve had no memories but seemed anxious to relearn them, and John had told him about Black Patch and their history together. Somehow John and Marlena hear a ruckus in the hospital nursery, possibly having to pass by on their way from Steve’s room to the main entrance; they immediately see Kristen’s in trouble with several nurses and a security guard surrounding her, and she’s become hysterical, not wanting them to take “Rachel” away! Marlena, working in the hospital as a psychiatrist, is easily able to intervene in the situation and John follows, dealing with security guards and getting them to back down.

Marlena is able to get Kristen calmed down and back to current reality, and baby Lily back to the nurse so she can be taken where she belongs. Marlena explains that Kristen most likely has post-traumatic stress from losing her own baby, and had been triggered. She tells a weeping Kristen that perhaps she needs a little more time to deal with her loss and heal before she works with babies again.