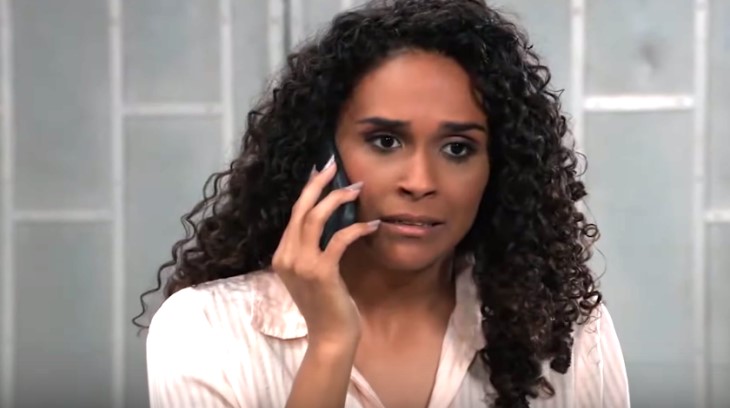 General Hospital (GH) Spoilers hint that Jordan Ashford (Briana Nicole Henry) may decide to resign from her job. Jordan has been contemplating whether she should keep her job after the events that took place with Cyrus Renault (Jeff Kober); she may feel like she does not deserve her job. Will she give up her job because of her guilt for turning in her old teammates?

Jordan is holding on to a lot of guilt, and it is no surprise that she would feel this way. She has had to push away her morals as she found out that her son, T.J. Ashford (Tajh Bellow), was kidnapped by Cyrus. She overlooked his shipment of drugs, which allowed him to get them into Port Charles.

Not only that, but she has had to throw her old teammates under the bus, and she feels like she needs to be punished for her parts in it. She also had to lie to others, including her son’s girlfriend, Molly, about what was really going on like TJ being kidnapped. So, will she really resign, or will she be stopped by someone beforehand?

TJ is back home, and that does may Jordan happy, but she cannot get over the idea that she did things that went against her morals. She might have decided that she does not deserve to be in that position. However, Curtis Ashford (Donnell Turner) may try and convince her not to quit her job because she loves what she does.

He might even tell her that by quitting, she will be letting Cyrus win and that he does not deserve to have that kind of power over her. It will be interesting if she would listen to Curtis if he does try to stop her from resigning from her job. Could this be the end of Jordan’s current career?

If Jordan does resign, she will have to come up with a believable reason for leaving her job, or she will tip everyone off. What do you think? Will Jordan resign from her job, and will Curtis try to stop her? We’ll give you updates as GH news comes in. Stick with the ABC soap, and don’t forget to check Celebrating The Soaps often for the latest General Hospital spoilers, updates, and news!