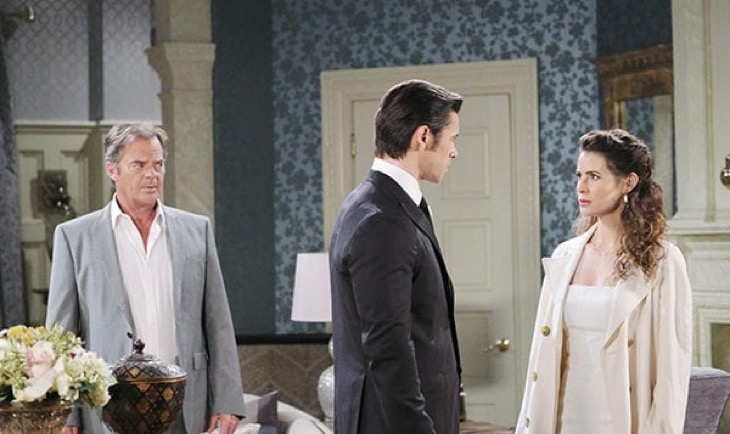 Days of Our Lives spoilers tease that Sarah Horton (Linsey Godfrey) will blast Xander Kiriakis (Paul Telfer) for his deception about Mackenzie Horton (Josephine and Rosalind May) while he tries desperately to keep her from leaving him in an upcoming episode of Days of Our Lives!

Xander meant well, at least as far as he is concerned; he didn’t want Sarah to know that her baby had died, and even though it wasn’t initially his idea to swap Mackenzie with Rachel Isabella Black (Josephine and Rosalind May) in the Salem University Hospital nursery, he is getting the full blame for it – Victor Kiriakis, (John Aniston) who pushed Xander into it, is totally being ignored for his part of it! Nicole Walker (Arianne Zucker) jumped on the hang Xander bandwagon first, then Eric Brady (Greg Vaughan) and now Sarah is blasting him for his lies.

Days Of Our Lives Spoilers: Marlena And John Intervene On Kristen’s Behalf

Even though he and Victor were trying to protect Sarah and her mother Maggie Kiriakis (Suzanne Rogers) from the awful truth; besides, who would have ever trusted Kristen DiMera (Stacy Haiduk) with a baby? Kristen was the mastermind behind Holly Jonas’ (Scarlett and Harlow Mallory) faked death and had Nicole captive the whole time that she was believed to be dead and then impersonated her just so she could get into Brady Black’s (Eric Martsolf) pants on a regular basis! Yet, Xander was thrown under the bus for his part of that as well! Now, his worst nightmare is coming true when all he was trying to do was keep Sarah’s worst nightmare from coming true!

Sarah did not take the news well when Eric told her – and he and Nicole wanted to make sure that she didn’t go through with the marriage to Xander! Victor was with Maggie, visiting her in prison, so he wasn’t there or he may have tried to explain why the decision to swap the babies was made as well! At the time, Victor was on the outs with his grandson Brady as well, so that may have had a factor in swapping their baby with Sarah’s. There is a possibility another baby girl may have been born the same night that they could have found to swap Mackenzie with, but Rachel was an easy target!

Days Of Our Lives Spoilers: Justin Worried About Losing Kayla – Would Bonnie Be A Good Mate For Him? #days #DOOL #DaysOfOurLives https://t.co/MwUpTxOJsb

Sarah couldn’t believe – didn’t want to believe – that her baby died and was swapped with Rachel, she felt betrayed by Xander, who Eric was quick to blame solely for the swap even though he knows that Victor was also involved, she felt betrayed by her colleague and friend Dr. Amanda Raynor (Victoria Platt), who she never would have believed would have done such a thing, plus she was hit at the same time with the double grief and shock that Mackenzie is Rachel and she would have to give Rachel to Brady and Kristen and that her Mackenzie was dead!

And now Xander is trying to tell her this all will make them stronger, and at least they have each other and they’re together? Fat chance! Sarah says she needs some space and is going upstairs to have a private goodbye with “Mackenzie” but not after kicking Xander out of her life and telling him she never wants to see him again!