The Bold and the Beautiful Spoilers: Brooke Crushes Shauna’s Dreams Of Being The Next Mrs. Forrester 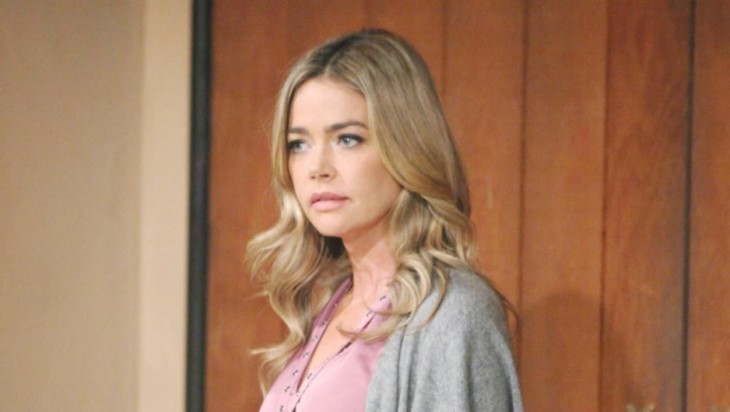 Shauna Fulton (Denise Richards) is floored on ‘The Bold and the Beautiful’. She still can’t believe that Ridge Forrester (Thorsten Kaye), the iconic fashion legend, wants to learn more about her life. But it’s no dream, he does.

Ridge insisted on accompanying Shauna to her home. Richards’ character wanted to leave Los Angeles, California, where she was living with her daughter, Flo Fulton (Katrina Bowden). Shauna’s decision was based on the level of respect and compassion she has for Ridge, even insisting that he return to Brooke Logan (Katherine Kelly Lang) while they were talking at her home in Vegas.

The Bold and the Beautiful Spoilers: Brooke Hunts Ridge Down In Las Vegas – And Drags Him Back Home To L.A.

Lang’s character can’t be discounted if Ridge is intent on pursuing a relationship with Shauna. Not only is Brooke determined to reconcile, but ‘Bridge’s’ history indicates that she will find a way to win him back eventually.

Shauna believes that Ridge is interested in her. She also thinks that he’s on the rebound, which would eventually lead to her being heartbroken.

The dramatic events that unfolded at the intended ‘Bridge’ reconciliation party, which was held at Brooke’s house, changed the current trajectory of Ridge’s life. Having just recently told Shauna that they couldn’t continue their friendship, Ridge redoubled his efforts to work things out with Brooke. Thomas Forrester’s (Matthew Atkinson) self-reveal at his sham wedding ceremony to Zoe Buckingham (Kiara Barnes) forced Ridge to admit that Brooke was right all along, with both parties forgiving each other that day.

The ‘Brill’ kiss video exposure stunted what was a very brief ‘Bridge’ comeback. Shauna’s pause in agreeing to be with Ridge is a natural response.

Ridge is rebounding, even if he doesn’t recognize that. Shauna is spot on in accessing his positive intentions in wanting to explore the potential of a relationship, while also realizing that Brooke will likely always occupy the largest part of his heart.

There has been a tremendous amount of tension in Ridge’s life since Thomas returned from New York with his son, Douglas Forrester (Henry Joseph Samiri), following Caroline Spencer’s (Linsey Godfrey) tragic death. Just when he seemed to have gotten hold over it, Quinn Forrester (Rena Sofer) uploaded the video Shauna took from outside of the cabin.

Anyone’s head would be swimming, after all, that’s happened within the past weeks. So, Ridge needs time to sort his developing feelings out.

Brooke’s entire history on B&B, which dates back to episode one in 1987, demonstrates that she’s resilient. So, there’s no chance that Brooke will surrender to Shauna.

Buzz indicates that unexpected developments in Vegas could supercharge this storyline. As always, devoted fans will keep watching, with ‘Bridge’ supporters hoping that all can be resolved.