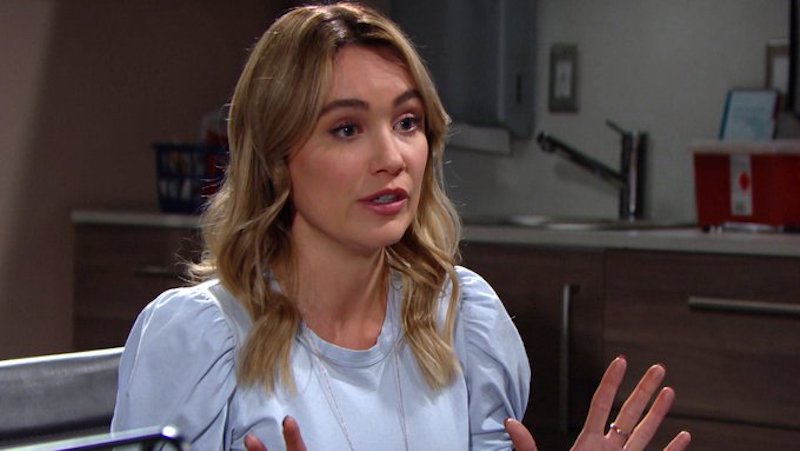 At Wyatt’s beach house, Sally pressures a worried Wyatt Spencer (Darin Brooks) about staying with her and leaving Flo, telling her that he and she should be together, and would be, if it weren’t for Flo, followed by a scene of Wyatt and Flo kissing. Then Flo asks Sally, “Do you really feel anything but hatred toward me?” Wyatt later talks to his mother, Quinn Forrester (Rena Sofer) and Katie Logan (Heather Tom) and tells them that Flo and Sally are no longer at each other’s throats, and Quinn remarks that it’s good that they are getting along. But then Sally pleads with Wyatt, asking him, “Please tell me that she’s (Flo) not going to come between us!”

Then Flo, obviously in Dr. Penny Escobar’s office, takes a look at Sally’s medical records on Penny’s computer – which actually would be illegal! She sees the results of some blood work up on the screen, specifically a complete blood count with differential platelet, and sees Sally had been checked for CKD, or chronic kidney disease, which some, but not all, of Sally’s symptoms would fit. She then goes to Sally and taunts her, telling her it’s over, and to admit she’s a fraud! Sally’s symptoms had been shaky hands, dizziness, and severe headaches, but viewers of The Bold and The Beautiful will recall an episode not long ago where Penny told her that they could be attributed to stress – which Sally was experiencing a lot of when she was trying to design for the fashion showdown, which apparently Forrester Creations decided not to go through with, considering Hope Logan’s (Annika Noelle) line kind of disappeared along with Thomas Forrester, (Matthew Atkinson), and when Katie had told Ridge Forrester (Thorsten Kaye) and Steffy Forrester (Jacqueline Macinness Wood) that Sally was dying, Ridge finished Sally’s designs, and included them in his Couture Collection, giving her full credit.

Viewers of The Bold and The Beautiful will also recall that Sally faked the whole thing to get Wyatt back, and her doctor friend Penny Escobar into the field of clothing design, and a job at Forrester Creations specifically. But now that Flo has decided to do detective work and has seen Sally’s medical records, she could decide to expose both Sally and Penny as frauds, but Penny could come back with criminal charges for Flo looking at Sally’s private medical information on Penny’s computer! Flo may think she has the upper hand, but if the computer was open to Sally’s records, it may have just been a case of some nosy snooping and not liable for criminal charges –but if the computer was signed into by Penny and then Flo accessed Sally’s medical records, that is another story entirely!