Days of Our Lives Spoilers: Sonny Encourages His Father To Fight For Kayla, But Does He Have Any Legal Standing? 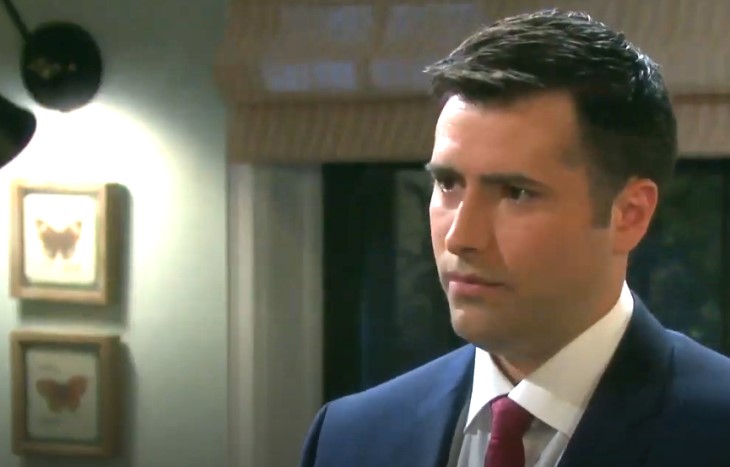 Days of Our Lives spoilers tease that Sonny Kiriakis (Freddie Smith) will encourage his father, Justin Kiriakis (Wally Kurth) to fight for Kayla Brady, (Mary Beth Evans) in an upcoming episode of Days of Our Lives; but does he have any legal standing? Steve Johnson (Stephen Nichols) didn’t sign the divorce papers in his right mind – he was under the influence of Stefano DiMera (Stephen Nichols) when he signed them!

Days of Our Lives – Justin Kiriakis Will Indeed Fight For Kayla Brady, But What About The Divorce – Is It Even Valid?

The current Days of Our Lives weekly preview show Justin at the hospital, at Steve’s bedside, where Steve is telling Justin “she’s MY wife”, getting a response from a stern Justin of “your EX wife!” However, is she really Steve’s EX wife? One would think that Justin, who is an attorney, would consider that Steve signing the divorce papers with a microchip in the frontal lobe of his brain containing the artificial intelligence of Stefano DiMera does not exactly reek of “implied consent” legally.

The divorce, indeed, may be invalid and Justin may not have any legal standing to fight for Kayla, although he may feel he has emotional standing. The question is, what – or who – does Kayla want? She keeps telling Justin she wants him, and indeed he will tell her he wants to be THE one, but she is now faced with over thirty years of memories of her time with Steve, and Steve has them as well! She never really did have any closure on their relationship since it was actually Stefano who abandoned her, not Steve!

This is much different than Justin’s case, where he was suddenly widowed and he knows Adrienne Kiriakis (Judi Evans) is not likely to show up alive anytime soon! The only way that could happen is if Bonnie Lockhart (Judi Evans) had been impersonating Adrienne the night she died, and there is no reason for anyone to suspect that! In order to fight for Kayla, she will have to be willing to fight against Steve in divorce court for a real divorce and willing to stay with Justin for the long haul!

Kayla, naturally, will be torn between the love of her past and the love of her present – how could she not be? She had to get used to what she had believed was Steve’s total rejection and non-communication with her for all those months, and had to deal with her feelings of rejection and anger towards him as well – although she had never really had true closure since she needed a reason for his sudden rejection, which before he revealed himself to be Stefano he did tell her that he had moved on with someone else – and she didn’t believe him!

Days of Our Lives Spoilers: Sarah Learns The Truth About Her Baby – Lashes Out At Xander On Their Wedding Day https://t.co/HjdCy57RTZ

Even though she had moved on with Justin, she still has all this Steve baggage she has been dealing with; how could she help it? You can’t just turn your feelings on and off like a faucet, especially towards someone you’ve been with for thirty-some years! Kayla needs to decide who she wants and then stick with her decision, and if she wants to stay with Justin she will need to fight Steve in divorce court to get a real divorce – she’s told Steve she moved on with Justin, but will Steve fight her on it?

He won’t likely feel like it’s fair for her to make divorce decisions based on actions he took when he was not in his right – or even in his own, mind!