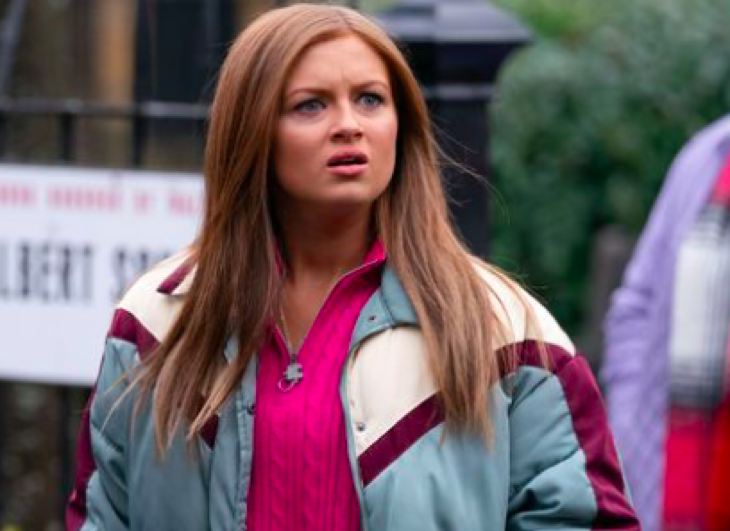 Eastenders spoilers reveal that in the upcoming week, Tiffany Baker (Maisie Smith) will make an emotional plea to police officers as they slam Keegan Baker (Zack Morris) down and handcuff him. Also, Dotty Cotton (Milly Zero) is sure that she’s going down due to Ian Beale’s (Adam Woodyatt) drastic attempt to keep her quiet about his actions the night of the boat tragedy.

EastEnders Spoilers: Will Sharon Learn About Ian’s Ultimatum To Karen?

In a preview trailer posted on The Sun, Tiffany watches helplessly as Keegan is arrested. Of course, he is innocent and in tears, Tiffany begs police officers to let him go. She doesn’t understand why they are arresting her husband because he didn’t do anything wrong.

However, that doesn’t stop the law enforcement officers from slamming Keegan down hard and putting him in handcuffs. Understandably, Keegan looks terrified.

Eastenders spoilers reveal that Tiffany will try to get Jack Branning (Scott Maslen) to help Keegan. The young man tells Jack that he had nothing to do with throwing the brick at the police car window. However, Jack doesn’t believe his version of the story. Despite not being believed, Keegan is released while the police continue to investigate.

The trailer also reveals that Dotty continues to be a problem for Ian and he is trying to not have his secret get out. As fans know, Dotty has been blackmailing him and recently threatened to let Sharon Watts (Letitia Dean) hear the voicemail. However, she was flabbergasted and panicked when Ian smugly told her, “what voicemail?”

As Ian and Dotty continue to engage in their battle, things start to look pretty bad for the young woman. She just wants Ian to squirm before the truth comes out. The dead teenager should have justice and Sharon deserves to know the whole truth.

EastEnders Spoilers: Could Mitch Try To Break Up Karen And Billy – Still In Love With Karen https://t.co/dcNvEABHNm #EastEnders

However, Ian seems to have framed Dotty for a crime and she is convinced that she is going down for it. What is she going to do now, especially since Ian has destroyed the one piece of evidence that implicates him in Dennis Rickman’s (formerly Bleu Landau) death on that fateful night? Will Ian end up winning or could Dotty find a way to beat him at his own game?

What do you think is going to happen with Keegan? Will he end up going to prison for a crime he didn’t commit? What about Ian, Dotty, and Sharon? What does the future hold for them? To find out, keep watching the soap to see how these storylines develop.