The Young and the Restless Spoilers: Adam Blinded By His Quest For Power And Revenge – Downfall Imminent? 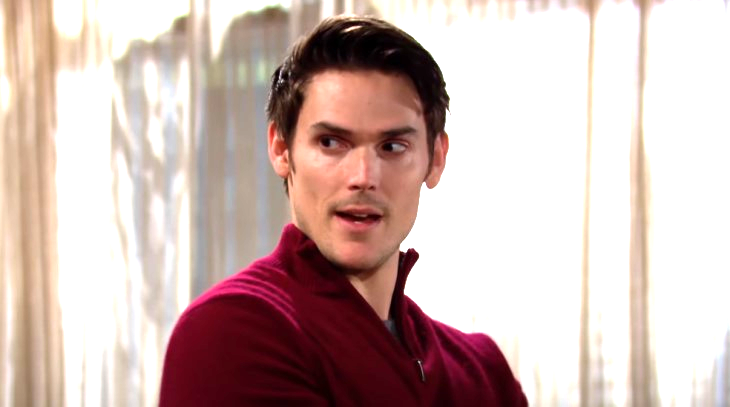 The Young and the Restless spoilers document that Adam Newman (Mark Grossman) has realized what he’s long wanted. He now sits in his father’s chair at Newman Enterprises.

Adam’s first act as the underhanded Chief Executive Officer was to personally take down Victor Newman’s (Eric Braeden) oil-based portrait that hung on the far wall. It started with the flare at all occupants of the suite and the audience for decades.

But the Moustache might not be vanquished and a friend from the past could prove to be Adam’s greatest challenge. Alyssa Montalvo (Maria DiDomenico) has been momentarily pushed off with the promise that the story Adam paid her to write is being pitched to a prominent magazine. Fans assume that means with a prominent, or exclusive online platform, as it’s not 1980 when Braeden first debuted on the show.

So, the blinding reference in the subject header of this section is a nod toward the major life issues that Adam had to confront himself and the ones he and Chelsea Newman (Melissa Claire Egan), as they were married then, had to handle for their infant son. Today, Adam’s recklessly choosing to be blind to Victor’s positive actions.

Adam’s reimagined bad childhood never existed. It was Hope’s decision to leave Victor and move, with their son, back to the farm in Kansas. Hope provided a wonderful life for Adam and Victor remained in touch, never wanting to have been separated from his second-born son.

Y&R Spoilers – But What About One Of Those Return Visits To Kansas?

Alyssa appears to have learned that Victor was involved, or was directly responsible for the death of her father. But A.J. Montalvo’s (a part that’s not known to be cast) demise is one that even Adam admits likely involved Victor defending Hope and himself (as a child).

To exploit what probably was a justified act of self-defense, or the defense of other people, possibly being Hope and Adam, is outrageous. But Adam is pursuing this course because he feels it’s the type of opportunity that his father would capitalize on if the projected outcome was in his favor.

Adam’s arrogance, as evidenced by the first act he took in what was, is, and will always be Victor’s office, was not to conduct business. Instead, he symbolically removed his father’s shadow.

But Y&R fans know that Adam said he killed a man in Vegas, in an act of claimed self-defense. His admission to Chance Chancellor (Donny Boaz) is still digitally controlled by Phyllis Summers (Michelle Stafford) and is, therefore, a real threat. But if Victor already knows this fact, or comes to, then such knowledge will create a stalemate, rather than the checkmate Adam assumes he’s achieved.