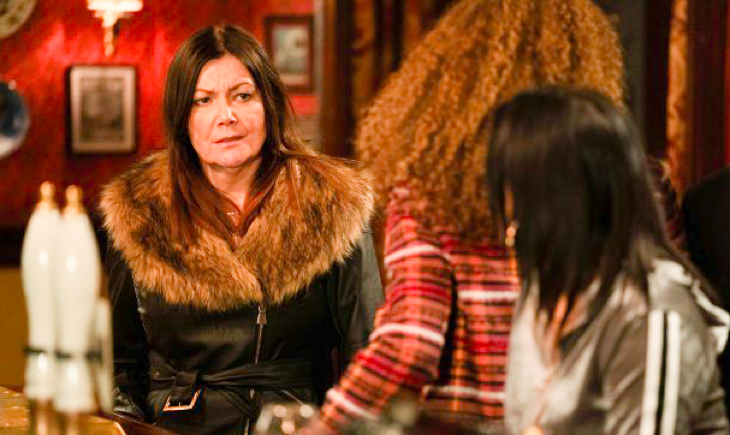 Eastenders spoilers reveal that Whitney Dean (Shona McGarty) still doesn’t know if she is going to prison or not for Leo King’s (formerly Tom Wells) death. However, she is going to face another problem this week when the dead man’s mother shows up. Michaela Turnbull (Fiona Allen) tracks down the tormented young lady. At first, things seem civil. Then, Michaela reveals her true colors and it gets intense.

According to Digital Spy, expect Leo’s mother to show up during the week of April 13. Her mission is to find Whitney and talk to her about what happened with her son. While she puts on the impression that it’s just a friendly chat, Whitney soon discovers that she fell into a trap.

Eastenders spoilers reveal that Michaela chats with Whitney at first, everything seems okay. They are talking and it’s a civil conversation. However, then things take a shocking turn after Whitney makes a shocking confession to the dead stalker’s mother. It could be her biggest mistake and you better believe Michaela is going to use it against her.

Right now, Whitney is in enough trouble as it is and Gray Atkins (Toby-Alexander Smith) is trying his best to clear her name. However, when things get nasty between Whitney and Michaela, he chases off Leo’s mom. But she’s not done with Whitney just yet.

She comes back to torment Whitney some more, but Gray pulls her aside and gives her a warning. Some might even call it a threat. It seems that if Leo got his stalking traits from his mother, then she might not heed Gray’s warning.

EastEnders Spoilers: Suki Will Get Even Darker – Is Panesar Matriarch The Ultimate Villainess? https://t.co/gSHomYVUad #EastEnders

Eastenders spoilers reveal that Gray ends up lashing out at his client. Just talking to the victim’s mother could make Gray’s case even more difficult. However, Whitney went beyond that by actually making a confession. Now, Whitney is certain she’s going to prison, but can Gray end up saving the day?

What do you think will happen to Whitney now that Leo’s mother has arrived? Can Gray prevent his client from going to prison? Or has she done too much damage by talking with Michaela? What exactly does Whitney confess to and could it jeopardize her case? Expect to see these scenes air on Monday, April 13 and Tuesday, April 14.