The Young and the Restless Spoilers: Nate And Amanda Share Passionate Kiss 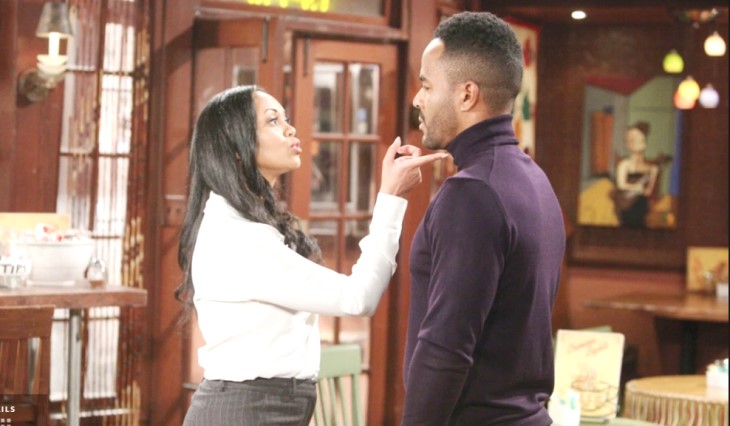 The Young and the Restless spoilers tease that a hot new romance could rock Genoa City to its core and some among the residents may not be ready for it.

Could Amanda Sinclair (Mishael Morgan) and Nate Hastings (Sean Dominic) be the next new Y&R super couple?
They could be if Dominic has anything to say about it!

Amanda Sinclair is slowly growing on people. Proof of that is Jill Chancellor (Jess Walton) actually apologizing to her this week. Jill is in town and when she is there is never a dull moment. But this time she shocked others with her kindness, extending an olive branch to Amanda who was literally speechless as well as humbled.

Amanda was once thought to be behind the stealing of Devon Hamilton’s (Bryton James) billions and when she showed her face in town—literally– everyone gasped!

She looks exactly like dead Hilary Winters, Devon’s deceased wife. That made everyone doubly suspicious and she took quite a beating for a while.

On the other hand, Nate has always been an upstanding guy, so his interest in Amanda will surely do something to clean up her image. In an interview with Soap Opera Digest Dominic says, “Nate finally sees that light in Amanda that was dimmed for a bit.”

So much so that these two go on a date that might lead to something much more!

In the past Nate flirted around with Victoria Newman (Amelia Heinle) but nothing came of it. Could he finally have a lady in his life?

The Young and the Restless Spoilers – Will Amanda Sinclair And Nate Hastings Rattle The Status Quo In Genoa City?

Dominic continues, “Nate sees that Amanda is still healing from Ripley, so taking it slow is her speed right now and he’s okay with that.”

Still, they find time to go out and an intimate moment arises while they’re together and they share their first kiss. Will this lead to a full-fledged romance?

And if so, what will Devon have to say about it? He’s a wild card in the mix, seemingly with unresolved feelings regarding the woman who looks just like his dead wife.

Will Devon throw a bombshell wrench into the romance in some way or another?