The Young and The Restless Spoilers: Newman Family On Verge Of War: Nikki Begs Victoria To Forgive Victor 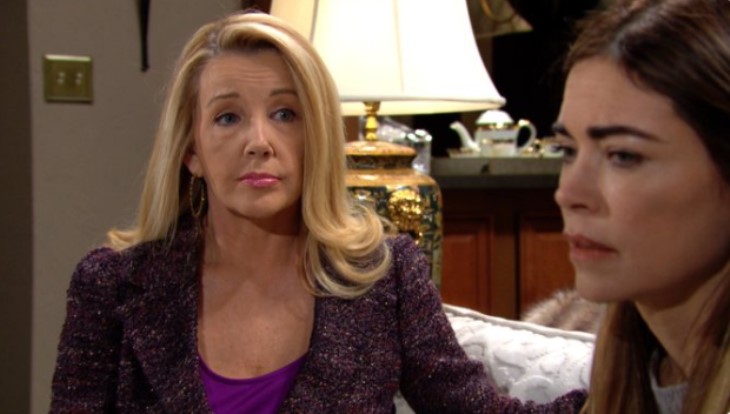 The Young and the Restless tease that a mother and daughter are at odds and the outcome could end up jeopardizing the family’s wealth and happiness.

Right now Victoria Newman (Amelia Heinle) is smarting from a low blow from her brother Adam Newman (Mark Grossman). But she’s also not happy with her father Victor Newman (Eric Braeden) who has played a major part in her downfall.

In the middle of this mess is Nikki Newman (Melody Thomas Scott) who wants peace and everyone to get along. Will she get her way or will Victoria ignore her and start WWIII within the Newman family?

It all started with Victoria being ensconced in her dad’s old chair at Newman Enterprises. Finally, she was the heir apparent, ruling the kingdom with an iron fist and a cascade of freshly styled brunette locks. Alas, the fairy tale was not to last.

Devious Adam found some nasty blackmail material that forced Victor to oust his daughter and install his son in the big boy chair. That chair gets a lot of action!

Now Victoria is out for blood and may have found the one person who can help her take down Adam.

But in the meantime Nikki wants Victoria to forgive her dad. Speaking to Soap Opera Digest, Heinle sheds some light on how things will go down, “Victoria was completely blindsided by Adam’s latest scheme. It’s too soon for Victoria to even consider reconciling with Victor.”

Uh oh, that sounds like Victoria is on the warpath and going 100 miles an hour! If Adam is careful he will get his ducks in a row. It seems unlikely now that he’s savoring the sweet smell of success in Victor’s luxurious leather chair.

The Young and the Restless Spoilers – What Will Happen Next For The Newman Family In Genoa City?

4 Wild Young and the Restless Weekly Spoilers April 13 to 17: Love Is In The Air – Newman Family In Turmoil – Nikki Stands By Victor #yr #youngandrestless https://t.co/B3cXYsfb5P

Victoria will try and ally herself with Alyssa Montalvo (Maria DiDomenico) someone else Adam has wronged. Together they have the ammo and moxie to pull Adam down to scorched earth.

There’s just one little, make that epic, thing that could go wrong.

If Victoria plays her card Victor could be exposed as a murderer. Is she crazy mad enough to do it?