The Bold and The Beautiful Spoilers: Quinn Pushes Ahead With Her Plan To Destroy Brooke – Eric Is Close To Dumping Her 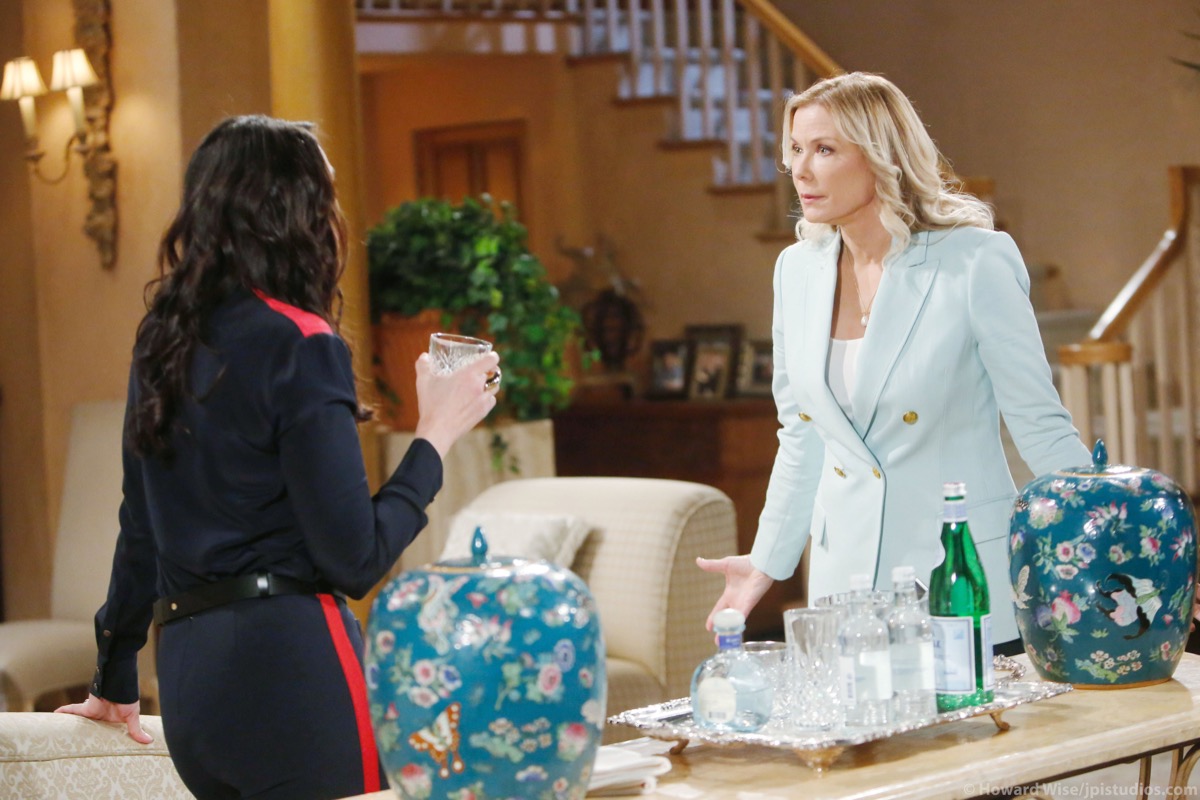 Quinn Forrester (Rena Sofer) can’t bring herself to back off Brooke Logan (Katherine Kelly Lang) on ‘The Bold and the Beautiful’. The seeming end of ‘Bridge’ wasn’t caused by Quinn’s actions, but by Brooke’s pattern of behavior being seen. At least that’s the perspective Sofer’s character keeps pushing.

Eric Forrester (John McCook) is increasingly agitated by his wife’s attitude about all that’s happened. That puts ‘Queric’s’ future in doubt.

Bold And The Beautiful Spoilers – Quinn Forrester Isn’t Telling All

The Bold and the Beautiful Spoilers: Quinn Sides With Katie- Wants Wyatt With Sally, Not Flo

Daytime devotees watched with shock as Quinn took advantage of Brooke’s distracted state of mind. She opened a bottle of liquor and poured a decent amount of alcohol into Brooke’s bottle. The incident was soapy, as anyone with a normal sense of smell and taste should have been able to tell there was more than juice in the container.

Quinn’s dastardly attempt didn’t push Brooke off the wagon, as was hoped. Thankfully, Lang’s character didn’t end her sobriety. But fans have been wondering if that incident would eventually be revealed, as Thomas Forrester (Matthew Atkinson) was later told about it by his step-grandmother.

Bold And The Beautiful Spoilers – Brooke Logan Unable To Stop

Brooke has loved Ridge forever. She’s not about to allow the pressure Quinn has been applying, in positioning Shauna in her soul mate’s path, in order to break ‘Bridge’.

Viewers recall that Ridge had divorce papers drawn a number of months ago. He signed them and so did Brooke, grudgingly. But Ridge never filed the legal documents, which means that they’ve merely been separated.

Encouragingly, Ridge reinforced that love wasn’t the issue just before he left the failed ‘Bridge’ reconciliation party. Even though he told Brooke not to follow him and she hasn’t, his mention of their enduring bond offered a glimmer of hope.

Bold And The Beautiful Spoilers – Eric Forrester On The Edge

Brooke previously demanded that Eric get rid of Quinn and Shauna. Lang’s character insisted that he divorce Quinn, in particular.

Eric told Brooke that he loved Quinn and was not about to end his marriage. But that was then, with current developments increasing chances that ‘Queric’ could end.

Thomas will be returning. When he does, Eric’s grandson could inadvertently, or purposely, depending upon his angle, mention Quinn’s juice bottle spike. That could prove devastating.

In lieu of the above happening, Quinn still skates on thin ice, as she’s put herself at odds with her husband, who retains a soft spot for Brooke. Eric also dislikes that Sofer’s character has willingly helped to destabilize his son’s marriage.