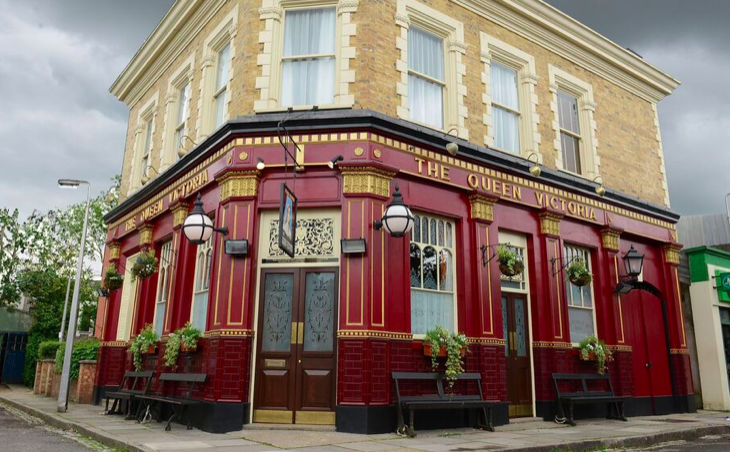 EastEnders tease that Phil might be the one who will buy the Queen Vic in order to bring some happiness to Sharon, who has an attachment to the Queen Vic. The Queen Vic will soon be sold off as Linda Carter (Kellie Bright) and Mick Carter (Danny Dyer) prepare to move out in order to get Linda away from the pub as she recovers from her alcohol addiction. This may lead to Phil deciding to take the pub off of Mick’s hands, which could lead to the transfer of ownership from Mick to Phil, making Phil and Sharon the new owners. How might this play out?

Mick and Linda have been having trouble as of late as Linda continues to struggle with her alcohol problem. The last time that she had a drink, Mick decided that it would be a good idea to move from the Queen Vic. It made perfect sense to leave as it is not a good idea to surround an alcoholic with alcohol and expect them not to drink. So, they decided to sell off the Queen Vic. Word recently got out, and now everyone is wondering who will buy the Queen Vic from Mick and Linda. However, Viewers will soon get the answer that they have been looking for.

Phil Mitchell (Steve McFadeen) recently had a talk with Shirley Carter (Linda Henry), which lead them to talk about the Queen Vic. Shirley thinks that this would be an excellent opportunity for Phil to strengthen his bond with Sharon by buying the place she loves, which is the Queen Vic.

EastEnders Spoilers: Corrupt Cop Tampers With Evidence – Could Keegan Go Down For A Crime He Didn't Commit https://t.co/AOpdZDNjAp #EastEnders

It seems that he took her words to heart. This may mean that the next owner of the Queen Vic will be no other than Phil. This will be a great opportunity for Phil to create a fresh new start and help him focus on something other than his son’s death.

It would be interesting to see how this might play out as Phil continues to think about whether he should buy the Queen Vic. What do you think? Should Phil buy the Queen Vic or are you hoping for someone else to buy the pub? Watch EastEnders from Monday and Friday at 8 pm and Tuesday and Thursday at 7.30 pm on BBC One to find out what happens next.