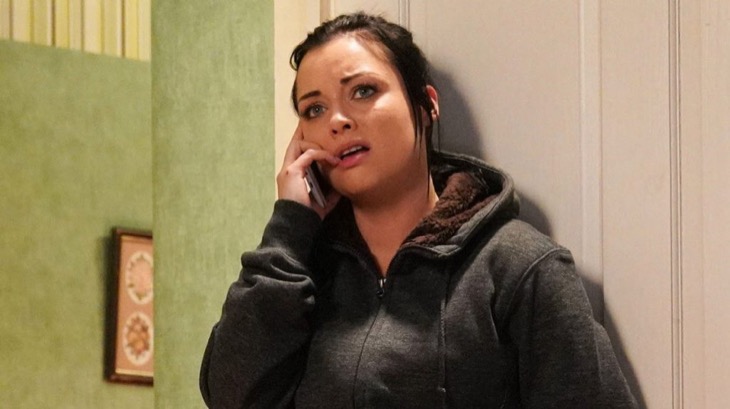 Eastenders spoilers for the week of April 20 reveal that Whitney Dean (Shona McGarty) feels she has no other option but to flee town. Keegan Baker (Zack Morris) explodes, which is witnessed by another. Jean Slater (Gillian Wright) will get a touching gift. Plus, find out what happens with Ash Panesar (Gurlaine Kaur Garcha) and Iqra Ahmed (Priya Davdra).

Just when Whitney thought things couldn’t get any worse, someone connected to dead stalker Leo King (formerly Tom Wells) arrives. Whitney makes the mistake of confiding in Leo’s mother, Michaela Turnbull (Fiona Allen). Then, the woman’s true intentions become clear when she is determined to destroy Whitney. It’s clear where Leo’s got his stalking and tormenting gene from, that’s for sure.

Whitney will continue to be traumatized by Michaela and it gets to the point in which the victim feels she must leave town. However, can her loved ones stop her and will there be consequences? Remember, she still has to go to trial for killing Leo in self-defense.

Eastenders spoilers reveal that Keegan has been in a foul mood. Tiffany Baker (Maisie Smith) ends up confronting him and Keegan responds by exploding. However, he soon regrets blowing up when his behavior is noticed by Bailey Baker (Kara-Leah Fernandes).

Things will go from bad to worse for “Teegan.” Not only is Keegan falsely arrested, but he stands a chance of going to prison. When he is released by police pending an investigation, he returns home only for Tiffany to drop a huge bombshell on him. Are the young newlyweds doomed?

According to Digital Spy, Jean ends up receiving a gift from Daniel Cook (formerly Adrian Edmondson). As fans recall, Daniel died on a park bench while sitting with Jean. It was an emotional and heartbreaking scene. In that moment, Jean promised to be more true to herself.

In the upcoming week, expect Jean to receive a gift from Daniel that touches her heart.

Eastenders spoilers reveal that Iqra has been concerned about Ash ever since she noticed her manipulative side. However, Ash ends up apologizing to her girlfriend and confessing her love. Will these two really be okay?

Fans can also expect Khoroush “Kush” Kazemi (Davood Ghadami) continues to keep Tommy Moon’s (Shay Crotty) secret under wraps. However, he does ask someone to keep an eye on the boy.