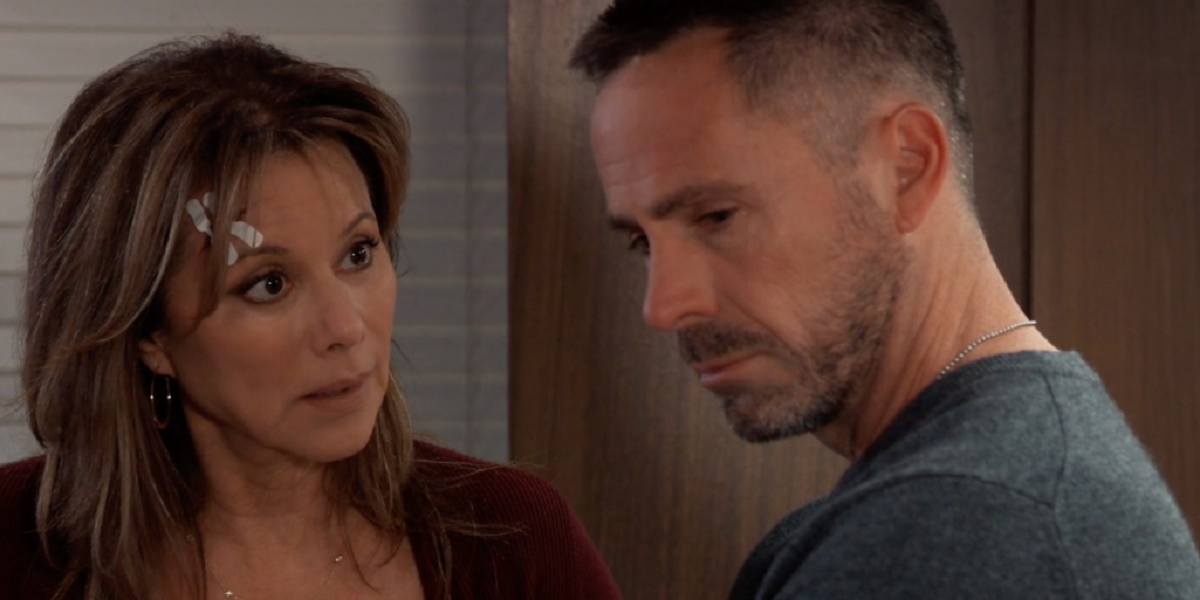 General Hospital (GH) spoilers indicate that Britt Westbourne (Kelly Thiebaud) has suddenly left Port Charles abruptly, Julian’s back to being single and without anyone in his bed. Julian and Britt weren’t serious anyway, it was all just casual. But Britt ended even that before she left because of Julian’s attack on Dr. Neil Byrne (Joe Flannigan). When Britt mentioned that she saw Julian’s ex, Alexis Davis (Nancy Lee Grahn)and Neil about to hit the sheets in New York City, Julian hit the roof!

Neil was Alexis’ therapist until last fall. After many false starts with therapy, Neil was the therapist who was able to help Alexis get over Julian finally. But they did start to have feelings for each other, which were only strengthened when Neil helped Alexis’ daughter, Kristina Davis (Lexie Ainsworth) finally break free on the Dawn of Day cult. Realizing that they could no longer be therapist and patient, Alexis stopped seeing Neil professionally.

Neil and Alexis went on an official date, a night of Drag Bingo, and had shared one kiss. Alexis hired a life coach after she stopped therapy. Unfortunately her new life coach, Kendra Bauer (Michelle Argyris) wanted revenge of Alexis for the death of her brother so she started to slowly poison Alexis with rat poison. As Alexis became ill, Julian and Neil worked together to save Alexis. Not that long after, Neil told Alexis that he was in trouble with the ethics committee because of their relationship.

General Hospital Spoilers: You have to wait two years

Neil either didn’t tell Alexis, or didn’t know that a therapist and their patient cannot have any kind of a personal relationship for two years after the professional relationship ended. Someone complained about Neil and Alexis’ relationship, even it had only consisted of one date and a kiss up until that point. Alexis convinced Neil to fight it, and Alexis offered to testify on Neil’s behalf in front of the Board of Ethics in New York City,

While in New York City the night before Neil’s hearing in front of the Board of Ethics, Alexis and Neil ran into each other at the opera. They both got emotional and although they resisted at first they ended up making love in Alexis’ hotel room. Britt just happened to be staying there, and she caught a glimpse of the two of them getting hot and heavy before Alexis closed the door. The next day Alexis lied to the Board and told them that she Neil had one date at drag bingo and no longer had any kind of personal relationship. So Neil was able to keep his license and took a position at General Hospital.

Alexis broke her sobriety after realizing that she can’t see Neil for two years, and by lying to the Board, now they have to keep their distance. She only had one shot but she called Julian and he took her to a meeting because she was visibly shaken. So when Britt mentioned that she saw them together, Julian believed that Neil took advantage of Alexis. Alexis wanted Julian to leave it alone, but Julian attacked Neil and threatened to end Neil’s career. But will Julian report Neil against Alexis’ wishes, leaving Neil to most certainly lose his license and his new position at General Hospital.

Now that Britt is gone, Julian may realize that he is still in love with Alexis. But if he reports Neil to the Board of Ethics, there won’t be anything keeping Neil and Alexis apart. So while Alexis and Neil do their best to stay away from each other, look for Julian to try to insinuate himself back into Alexis’ life and bed. A lot of fans want this to happen, but the truth is, Julian held a knife up to Alexis neck while they were married and was going to slit her throat. Anything Neil has may be slightly unethical, but Julian has done much worse. And it took therapy for Alexis to finally realize that she deserves better than a abuser like Julian. He may have turned his life around, but Alexis will have to live with those memories forever.

GH Spoilers: What will happen?

Will Alexis go back to Julian after working so hard to get over him. Or will she wait the allotted two years until she can be with Neil? What do you think? Love is complicated in Port Charles, so stay tuned to General Hospital airing weekdays on ABC. And don’t forget to check back here regularly for all your General Hospital news, information and spoilers