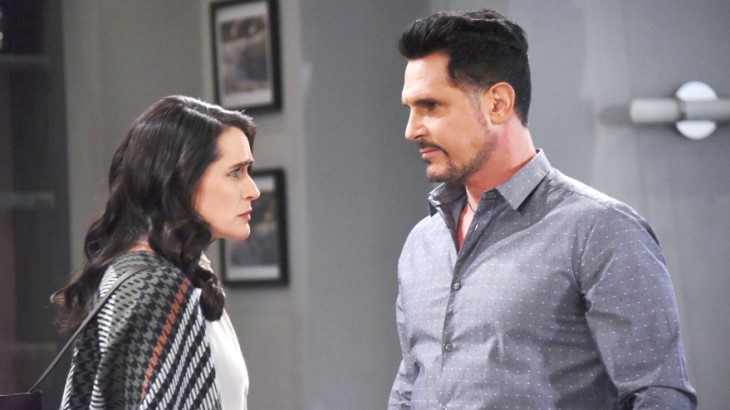 The Bold and the Beautiful spoilers reveal that Bill Spencer (Don Diamont) isn’t going to let Quinn Forrester (Rena Sofer) get away with destroying his relationship. Katie Logan (Heather Tom) doesn’t seem interested in giving Bill yet another chance. So, could he end up getting revenge by destroying Quinn’s marriage to Eric Forrester (John McCook)?

B&B spoilers reveal that Quinn set out to destroy Brooke Logan Forrester (Katherine Kelly Lang). While she was trying to cook up an epic payback scheme, she had no idea that it would fall right into her lap. Even though Shauna Fulton (Denise Richards) deleted the “Brill” video, Quinn managed to send it to herself first.

Bill and Brooke’s kiss being exposed during the “Bridge” reunion party would end up shattering Quinn’s enemy. However, there were also others that ended up paying a painful price, although they were not the intended targets.

It is teased that even though Quinn never meant for Katie Logan (Heather Tom) to get hurt, she is considered collateral damage. Despite Eric wanting his wife to apologize to Katie, Quinn refuses. She honestly believes that she did Katie and Ridge Forrester (Thorsten Kaye) a favor.

No Regrets and No Apologies

The Bold and the Beautiful spoilers reveal that Quinn isn’t worried about Eric’s reaction to her latest scheme. She feels that the “Brill” exposure was necessary and has no regrets about it. Even though Eric tries to reason with Quinn and create peace, it won’t work. Quinn has no remorse, no regrets, and will give no apologies.

The Bold and the Beautiful Spoilers: Bill Spencer’s Revenge

Bill confronts Quinn about her cruel revenge plot and how it destroyed his relationship with Katie. She doesn’t feel bad about it at all. She also isn’t concerned when Bill issues a threat. However, she might change her tune when she gets a dose of her own medicine. It’s likely that Bill will get payback by hurting Quinn the way she hurt everyone else — by destroying her marriage to Eric.

Do you think Bill will end up destroying Quinn’s marriage to Eric in order to get payback? What will make the naughty brunette understand that her actions have consequences? Is there any coming back from this or is Quinn’s romantic fate sealed? We will have to wait and see what happens with these characters in the next few weeks.