General Hospital Spoilers: Brad Can’t Sit In Prison Forever – How Will He Get Out? 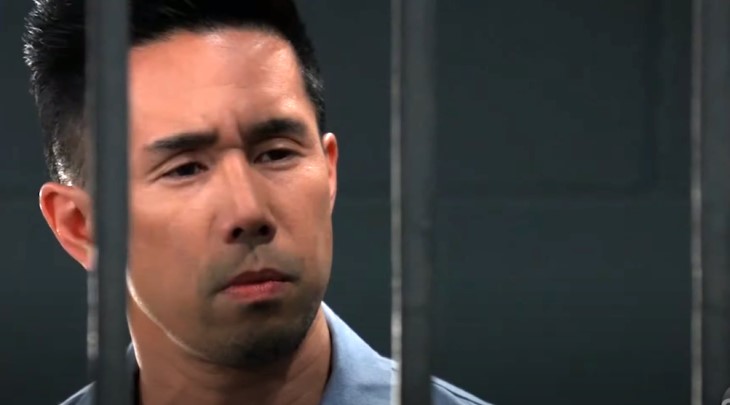 General Hospital spoilers tease that a certain prisoner can’t cool his jets behind bars forever—he’s got things to do, places to be and people to see.

Brad Cooper (Parry Shen) is wearing prison stripes instead of hospital scrubs these days. He had to hang up his lab coat after his role in a terrible baby switch was exposed and his actions cost him dearly.

But it’s hard to fathom that wire as live as Brad will be in prison from here to eternity, begging the question, how will he get out?

General Hospital Spoilers – Brad Cooper Can’t Sit In Prison Forever – How Will He Get Out?

For a while there it appeared that his partner in crime, Britt Westbourne (Kelly Thiebaud) would be his ticket to ride. It was looking bleak for Brad, with the whole town turned against him after his latest deception.

So, when The Britch suddenly appeared in Port Charles, the logical conclusion was that she would play a hand in helping him to escape. Instead, she slept with his arch-enemy—that’s what friends are for?

Britt slept with Julian Jerome (William deVry) and no one really knows why. Brad told her that Julian ruined his life so her jumping into the sack with the cad makes no sense. There is speculation that Britt will produce a mini Julian however, in which case Julian would be beholden to her, and by extension to her bestie Brad.

Is it conceivable that his number one foe would gain Brad’s release, as a favor to Britt?

Brad seemingly has little to no chance to get out of his sticky situation, a situation in which he squarely put himself. His husband Lucas Jones (Ryan Carnes) wants nothing to do with him now, but could all that change? Lucas is an upstanding citizen and his word with the court would carry a lot of weight.

General Hospital Spoilers: Should Valentin Be A Part Of Charlotte’s Life? https://t.co/sQ80fRCYUd pic.twitter.com/FxZr28yOwP

We can envision a scenario wherein Mr. Wu hears what Sonny did to his son and returns to town to avenge and save Brad through his underworld connections. What do you think GH fans, how can Brad get out of prison?