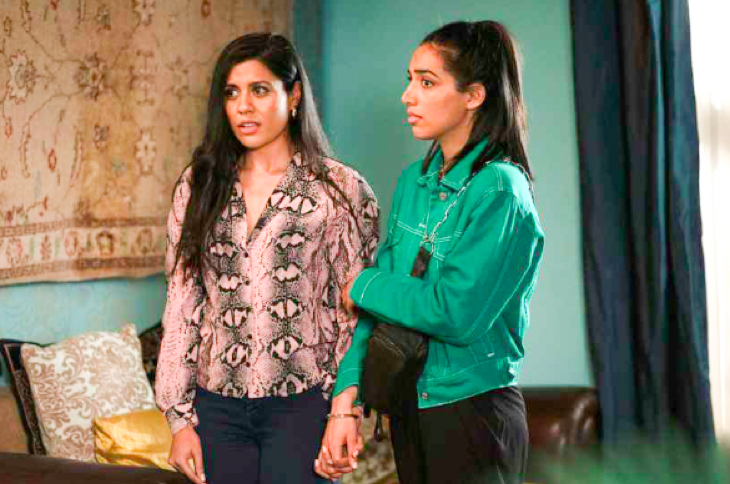 EastEnders hint that Ash Pansear (Gurlaine Kaur Garcha) and Iqra Asmend (Priya Davdra) will be making up in upcoming episodes. Iqra has seen a new side of Ash, and she did not like it, which caused some problems for the two as they argued about the situation that they are in. However, will Ash change her ways, or will she just get better at hiding it from Iqra?

EastEnders Spoilers: Tiffany At Wits End – Can Not Handle Life With Keegan

Recently, Iqra and Ash have run into some problems as Iqra has seen a whole new side of Ash, and she did not like this. This happened at the party that was thrown by Vinny Panesar (Shiv Jalota). The party quickly went up in flames as chaos began with the police showing up, which leads to a brick being thrown at a Police car. While chaos erupts outside, things began to get a little crazy inside as someone approaches Iqra and Ash being very creepy and insulting towards them. This caused Vinny to beat up the guy until he was stopped by Ash. Things then became complicated for them as they realized that the police would be there soon and that they needed to hide what they did.

This is shocking for Iqra, and she lets disdain of the situation show. However, she is shot down immediately. It wasn’t until Iqra left, and Ash sat down and began talking to Vinny that she realized that her family is the best at handling things correctly. She ditched Vinny to go to her home with Iqra. It seems that they will make peace; maybe Ash will try to separate herself from her family enough to not go back to her scheming ways.

Viewers may see a change in Ash for the better as Ash tries not to go back to her scheming ways and tries to keep her relationship with Iqra together. What do you think? Will Ash and Iqra last, or does Ash’s family have too big of an influence on her? Watch EastEnders from Monday and Friday at 8 pm and Tuesday and Thursday at 7.30 pm on BBC One to find out what happens next.